Nothing destroys the enjoyment of a round of golf then consistently missing the fareway and finding your ball in the rough, or worse yet, lost among the trees. But what if you could hit the ball straight as an arrow… every time.

Polara Ultimate Straight Self-Correcting Golf Balls are designed to correct hooks and slices which means, if you slice a golf ball 100 feet, the exact same swing with their anti-slice balls should slice only 25 feet, leaving you in the fairway instead of the rough. PGA pro and YouTuber Rick Shiels decided to put these little engineering marvels to the test.

''It gives you a level of confidence. It almost feels like when you go bowling, its almost like barriers up to the sides, because I've not missed center yet with the straight ball.''

Shiels headed out onto the Marriott Worsley golf course in Manchester, England to try out the Ultimate Straight balls, and even gave a trio of average golfers a whack at them.

The original Polara golf ball was developed by scientists Daniel Nepela and Fred Holmstrom in the early 1970s. The Polara’s dimple pattern was unique, having six rows of normal dimples on its equator, but very shallow dimples elsewhere. The asymmetrical dimple pattern was a breakthrough in aerodynamic design that helped the ball self-adjust its spin-axis during the flight and thus corrected slices and hooks in flight. 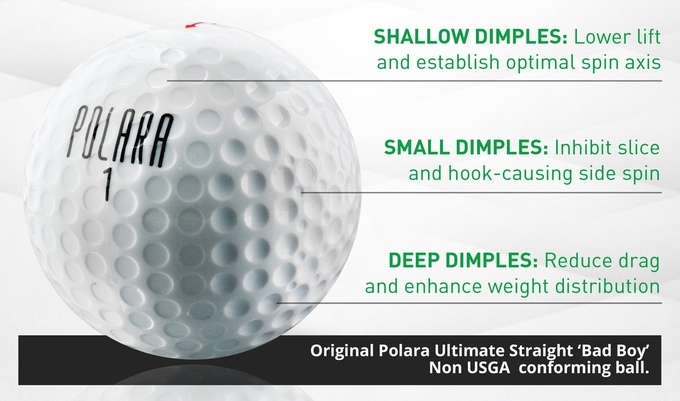 After extensive testing, the USGA concluded that the Polara golf ball did correct hooks and slices and thus refused to approve the ball for tournament play, ruling that it would “reduce the skill required to play golf.” In 1978, the manufacturers sued the USGA on antitrust grounds.