For the past six years, The Art of Ping Pong project has been raising money for charity by auctioning off artistically-enhanced table tennis paddles (or, bats, as they are called in British parlance). 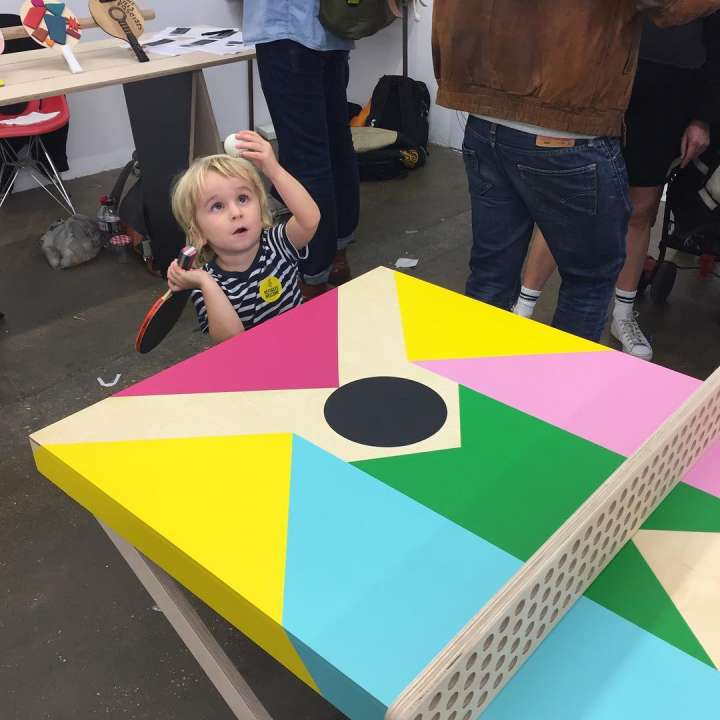 A sampling of the paddles that are currently being auctioned off is offered below.

Joe Cruz is a visual artist based in London, known largely for his early pastel works upon found photography. Cruz’s work touches upon themes of culture, identity and traditions, often using found film footage from his family archives to his own photography.

Ben Branagan is an Associate Lecturer at the London College of Communication, whose work has been exhibited in the UK and internationally and can be found in collections including the Tate Artists book archives.

Ed Cheverton is a Bristol based Artist and Illustrator. His creations feature fun characters in strange worlds and spans collage, comics, zines, toys and more.

Anna Bu Kliewer is a Gerkainian mixed media artist living and working in London. She works in both analogue and digital collage, creating still and moving image. Driven by her curiosity about other realities, time and space, she likes to challenge one’s perception of identity and environment by transforming found imagery into a new, surreal context.

Trained at Chelsea and the Royal College, Peter Quinnell has been a collage and assemblage illustrator and artist for almost 30 years. Formerly half of legendary college duo Archer/Quinnell, he has been working solo since 1998, to immense commercial and critical acclaim.

Jo Hummel’s work is characterised by a painted and paper collaged surface on which she employs spontaneous variations of space, colour and form. Although her painting collages are physically engaged and materially driven the context is purposefully anthropological and Hummel’s works are informed by human habits and behaviour, with a particular interest in determinism and freewill just as much as formal concerns.

Jimmy Turrell is a graphic artist and video director, who studied at Central St Martins School of Art. He combines a love of handmade collage, drawing, screen-printing and painting alongside digital techniques.

James Dawe is a London based multidisciplinary artist whose photo-collages and digital manipulation result in dramatic and distorted imagery. Pushing and pulling a compostion whilst experimenting with variations and layers. Dawe merges and mixes images from different sources combined with computer generated graphics.