For years, former Western Force winger Nick Cummins entertained Australian rugby fans with colorful postgame interviews, but it was only recently that his brilliant quotes were discovered by an American audience.

Cummins’ curly hair and colorful quotes inspired diehard fans to go that extra mile to show their support when dressing for one of his rugby matches.

With so many delicious Aussie-flavored utterances to chose from, it’s as “tough as woodpecker lips” to settle on a top ten, but we gave it a go nonetheless.

''That look on your face like someone asked me to clean the toilet and I was just bloody goin' for gold.''

''Just like that kid that fell outta the tree ya know, he just wasn't in it.''

''I'm gonna have a truckload of pudding and uh, old mum's good on the cook too. Dad's got the tucker ready over there and mum and dad are gonna work together and form a massive feed and I'm gonna come in and dominate it.''

''Last year we were all sizzle and no steak, but now we're off like a bride's nightie.''

''Have you ever heard of the Bible story of Samson and Delilah? Well, that's got nothing to do with what I'm doing...''

''He was sweating like a bag of cats at a greyhound meet.''

''It was quite an emotional loss, but jeez there's a bee's wanger in it and we're not far off.''

''Sea of Blue, we're going to bloody kick the tires and light the fires. So get your jacksie down bangin' on a seat and we'll shake hands and tell a few stories after the game.''

''Got a couple of knocks and a whack on the schnoz.'' 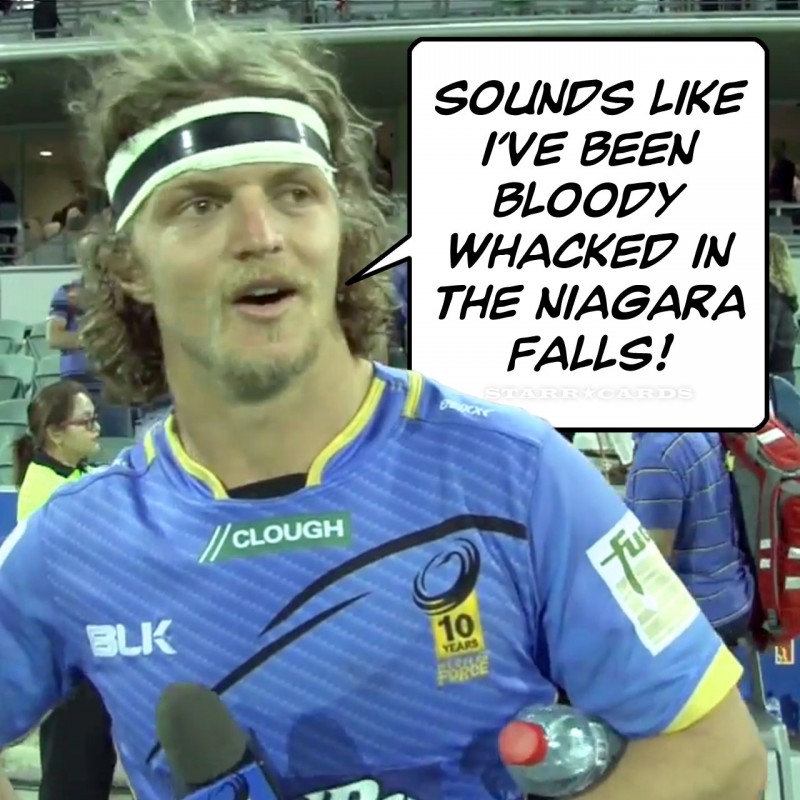 ''You know what, sounds like I've been, bloody whacked in the Niagara Falls.''