With their 103-96 overtime victory over the Utah Jazz in Salt Lake City on Wednesday night, the Warriors became the fastest team in NBA history to reach 68 wins. The night before, the Dubs became the first franchise to record 54 home wins in a row, besting the record set by the ’96 Bulls by ten games.

Stephen Curry led the way for the Warriors with 31 points, but it was Klay Thompson’s 3-pointer that dramatically forced overtime and allowed the Warriors to escape with yet another W.

Curry broke the previous record of 286 3-pointers, which he set last year, with 24 games remaining. With five more treys against the Wizards, Curry brought the season total to 361. With seven games remaining, he will have to average almost six 3s per game to breach 400.

''I love our competitive spirit. No matter what our record ends up, it almost doesn't matter. It is just an incredible display of competition and fight night after night.''

Thompson has 258 3-pointers for the season, and still harbors hopes to become the second player (after Curry) in NBA history to surpass 300. Together, the Splash Brothers have dropped an NBA record 619 three-pointers on their opponents this season.

The Warriors will have to finish the season 5-2 or better in order to break Chicago’s 72 win total. The good news is five of the games are at Oracle Arena where the Dubs are undefeated thus far. The bad news is they still have two games left with the Spurs, including one in San Antonio. 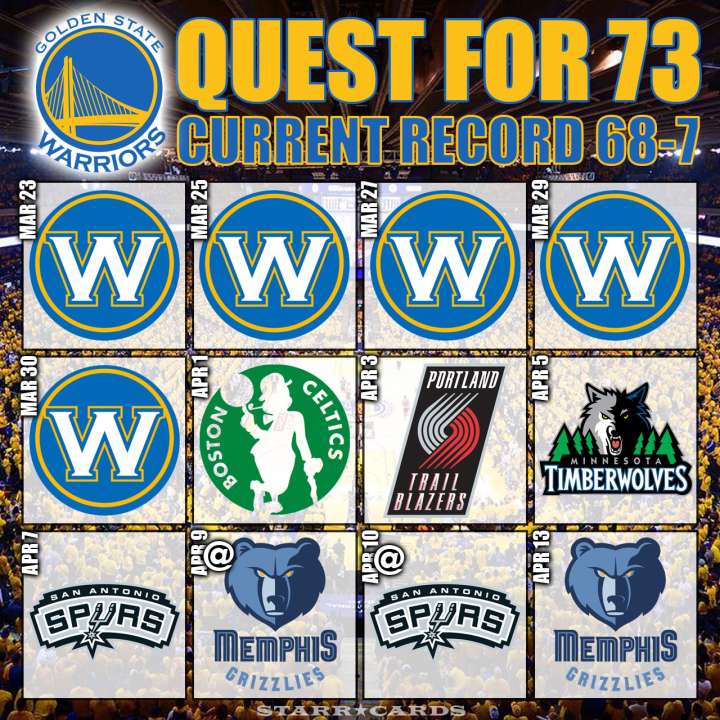