Virat Kohli is to cricket as Stephen Curry is to basketball

Virat Kohli is to cricket as Stephen Curry is to basketball

While sports fans in the United States have enjoyed following Stephen Curry’s historic season for the Golden State Warriors, half a world away eyes have been glued to an offensive juggernaut of a different stripe. On Sunday, India’s Virat Kohli delivered his most recent scoring fireworks to eliminate Australia from the ICC World Twenty20 cricket tournament.

Kohli’s unbeaten 82 runs off of just 51 balls, accounted for more than fifty percent of India’s offense in their victory over the Aussies. Just as importantly, he steadied his team after India lost three wickets for just 49 runs and Australia looked to have the match in hand. The dramatic win advances India to a semifinal match versus the West Indies scheduled to be played Thursday at Wankhede Stadium in Mumbai.

Genius. Virat Kohli sends India through to the #WT20 semis, Aussies knocked out.

During the match with Australia, Kohli reached 1,500 runs in T20Is in the fewest number of innings (39). He also set the standard for the most Player of the Match awards (6) in a calendar year in T20Is.

In addition to the recent records set by Kohli, he holds Indian batting records for the fastest One Day International (ODI) century, fastest batsman to 5,000 ODI runs, and fastest to 10 ODI centuries. He is only the second batsman in the world to have scored 1,000 or more ODI runs four years in a row. In 2015, he became the fastest batsman in the world to 1,000 runs in T20Is.

Along the way, awards have been piling up for the dynamo from Dehli. Kolhi was named the ICC ODI Player of the Year in 2012, and BCCI’s international cricketer of the year for the 2011–12 and 2014–15 seasons. In 2013, he was given the Arjuna Award in recognition of his achievements in international cricket.

Aside from making an all-out assault on his sport’s record books, Kohli, like Curry, has melted social-media hearts by posing with an impossibly cute tyke. In Kohli’s case, he borrowed captain Mahendra Singh Dhoni’s daughter, Ziva, for a snap, whereas Curry’s cohort has been his own telegenic daughter, Riley. 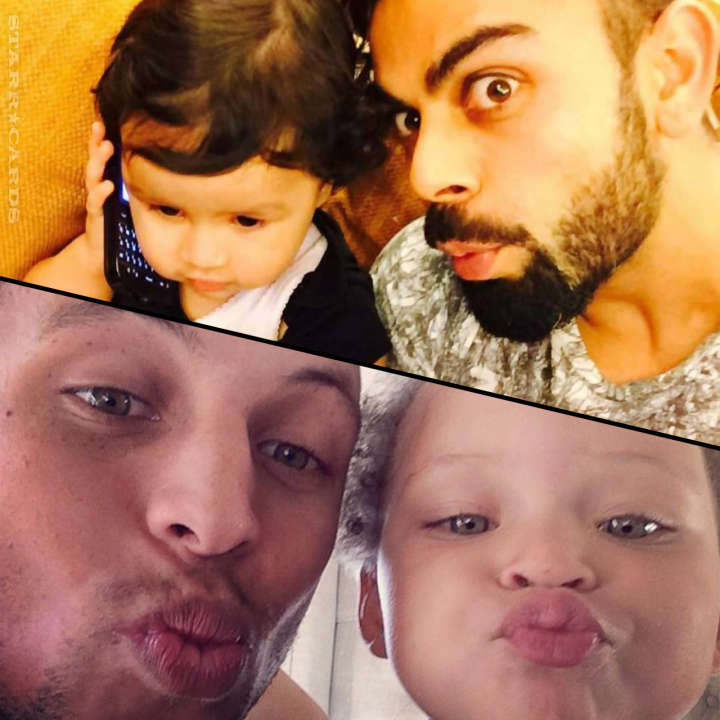 Praise for Kohli’s performance has come from all quarters. Former India captains Kapil Dev and Sunil Gavaskar gushed during their live commentary on the match with Australia, while former England captains Nasser Husain and Michael Vaughan expressed their admiration via Twitter.

No question @imVkohli is the greatest ever judge of a chase I have ever seen … Cool as you like .. #Timing #Genius #INDvAUS

The most significant kudos for Kohli came from the Michael Jordan of cricket, Sachin Tendulkar.

Woooow @imVkohli …special it was… Great win, fighting all the way! #IndvsAus

''This is the best T20 innings I have ever seen. He is the finisher for all time. He had built a reputation out and today he just cemented that. It was exhilarating.''