It was an eventful Game 6 in the NBA Finals, with as much action taking place off the court as on. Even before the game began, social media was abuzz with commentary on LeBron James’ friend Jay Z and Beyonce being in attendance.

Somebody get that dude that touched Beyonce's hair!!!! 😡😡😡 #hetriedit #Beyonce #nbafinals

As the royal rap and pop couple exited the game via the tunnel to the locker rooms, it appeared that a Cavs fan reached over the bleacher railing to feel up Bae’s kinky golden locks.

Golden State Warriors point guard Stephen Curry also had some fan interaction in Cleveland. After getting whistled with a sixth foul on a questionable call, the NBA MVP hurled his mouthguard in anger and hit Andrew Forbes, son of Cavs minority owner Nate Forbes, who was seated in the front-row.

Curry’s temper tantrum earned him the first ejection of his career, but he didn’t exit the court without first making good with the inexplicably blue-shirted Forbes.

''It's all good. It just hit me and I was like, 'Who? What?' I was just cheering, being a fan. I don't even know where he was throwing it. It just hit me in the face. He was good about it.''

— Andrew Forbes, on being hit with Curry's mouthguard

As bad as Steph had it, wife Ayesha Curry, who was in attendance, was even more chagrined. She tweeted, “I’ve lost all respect sorry this is absolutely rigged for money… Or ratings in [sic] not sure which. I won’t be silent. Just saw it live sry.” 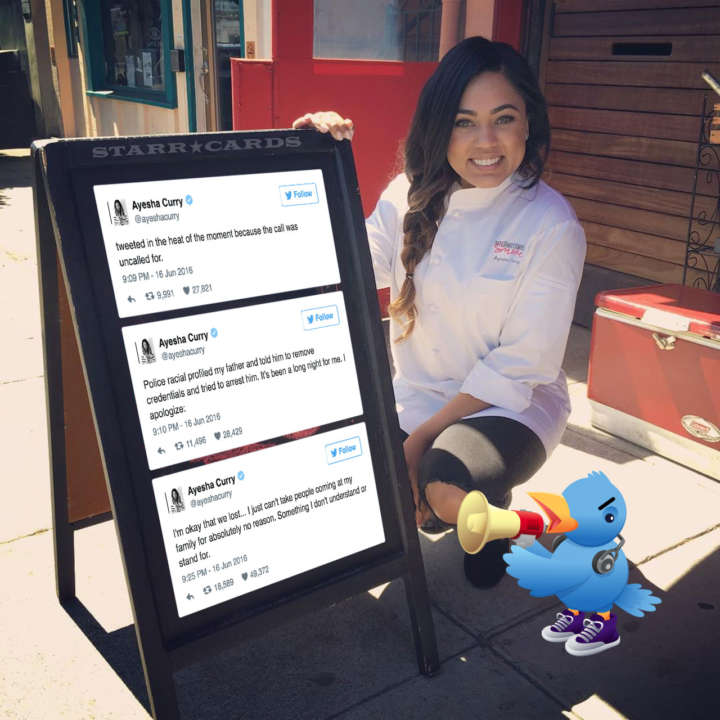 She later deleted the tweet, and put it into context with three more tweets, before tweeted again today to call out Stephen A. Smith of ESPN’s First Take, for comparing her unfavorably to James’ wife.

@stephenasmith why are you putting two women against each other like that? You're the one that's out of pocket.