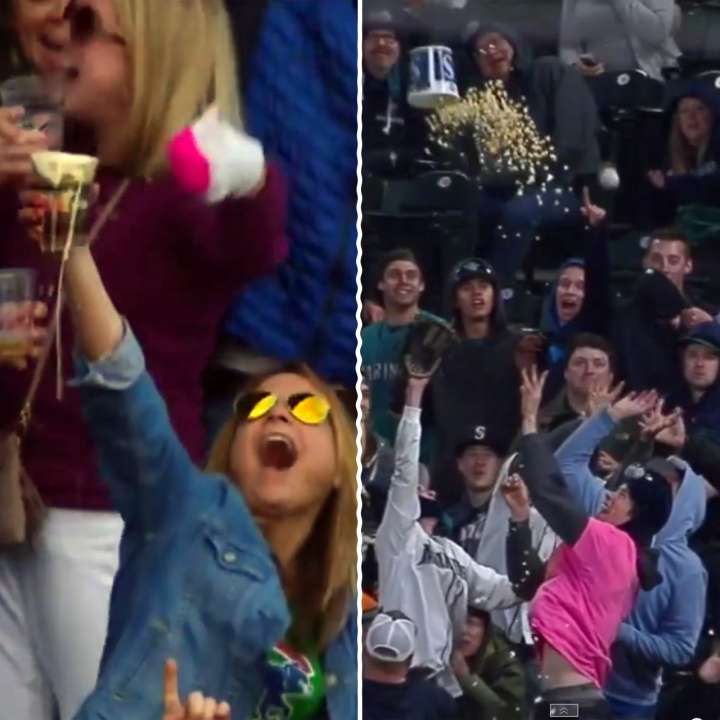 The past fortnight of baseball provided all most as much entertainment outside the lines as within. It all started with a Chicago Cubs fan using her beer cup as an impromptu glove to snag a foul ball.

San Diego Padres first baseman Yonder Alonso hit a foul ball in the top of the ninth inning against the Chicago Cubs. Somehow the ball found its way into a fans beer, and just as in beer pong, if a ball lands in a cup, you drink it.

Normally, a fan will only toss a ball back onto a field when it represents a home run hit by the visiting team. But a young Seattle Mariners decided to reject a foul ball hit by Robinson Cano.

Almost everyone who has ever played baseball, has one time or another tried catching an out-of-reach ball with a thrown glove. This past Saturday, a fan at the Twins-Mariners game made an ill-advised attempt with a bucket of popcorn.

I’LL TUMBLE FOR YA

The best part of this Diamondbacks fan tumbling over a row of seats to claim a foul ball hit by Tubby Gosewisch is what happens afterward. The ballpark attendant, after checking to make sure the ball hound is uninjured, signals him safe as he struggles to return to his seat.