Brett’s heated reaction to the ruling, plus the fact the game was in the ninth inning and being contested at Yankee Stadium — baseball’s biggest stage — magnified the event such that it became known as the Pine Tar Incident.

Brett’s home run, which came with two out in the ninth and a man on base, dramatically (and temporarily) gave the Royals a 5-4 lead over the Yankees. Subsequently, Yankees manager Billy Martin insisted that Brett’s bat be inspected, which led to several minutes of discussion amongst the umpiring crew. After determining the height of the pine tar on the bat exceeded 18 inches, home plate umpire Tim McClelland ruled Brett out which resulted in the home team winning 4-3.

Enraged, Brett raced out of the dugout to confront the much bigger McClelland, but was held back by the Royals manager, teammates and another umpire. The Royals ended up protesting the game and four days later their complaint was upheld by American League president Lee MacPhail. With Brett’s home run restored, on August 18 the game was continued from where it had left off and the Royals prevailed 5-4, despite Martin trying every trick in the book to invalidate the result.

On the eve of its 30th anniversary, Brett looked back on the Pine Tar Game recalling how he had continued using the bat for a couple of games after the incident. Teammate Gaylord Perry suggested he retire the bat due to its potential value. 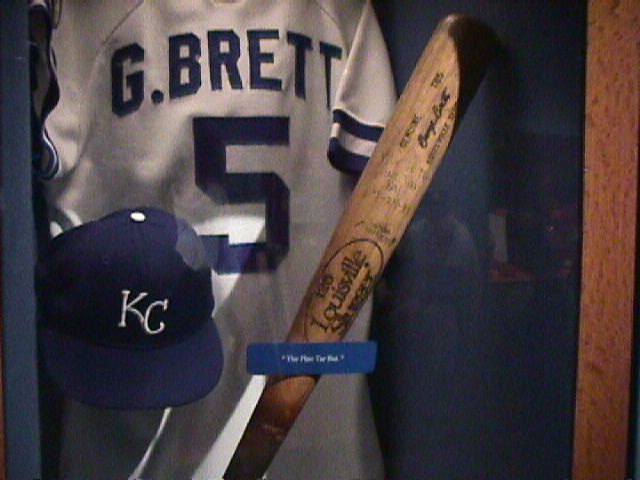 Shortly thereafter Brett sold the bat to collector Barry Halper for $25,000, had second thoughts, bought the bat back and donated it to the Hall of Fame where it still resides.