First Pope Francis got his own baseball card; now he has a retro soccer card too

First Pope Francis got his own baseball card; now he has a retro soccer card too

Even divine intervention couldn’t rescue the 2015 Philadelphia Phillies — they were mathematically eliminated from the playoffs in mid-September of that year when they lost 5-4 to the San Diego Padres. Still, that didn’t prevent the team from issuing a rookie baseball card for Pope Francis ahead of his visit to the city.

While it couldn’t have hurt to curry the pope’s good graces, it’s doubtful the then 78-year-old could have provided much value as a fielder. His baseball experience is limited to a botched bare-handed catch attempt in 2014 at St. Peter’s Basilica in Vatican City. 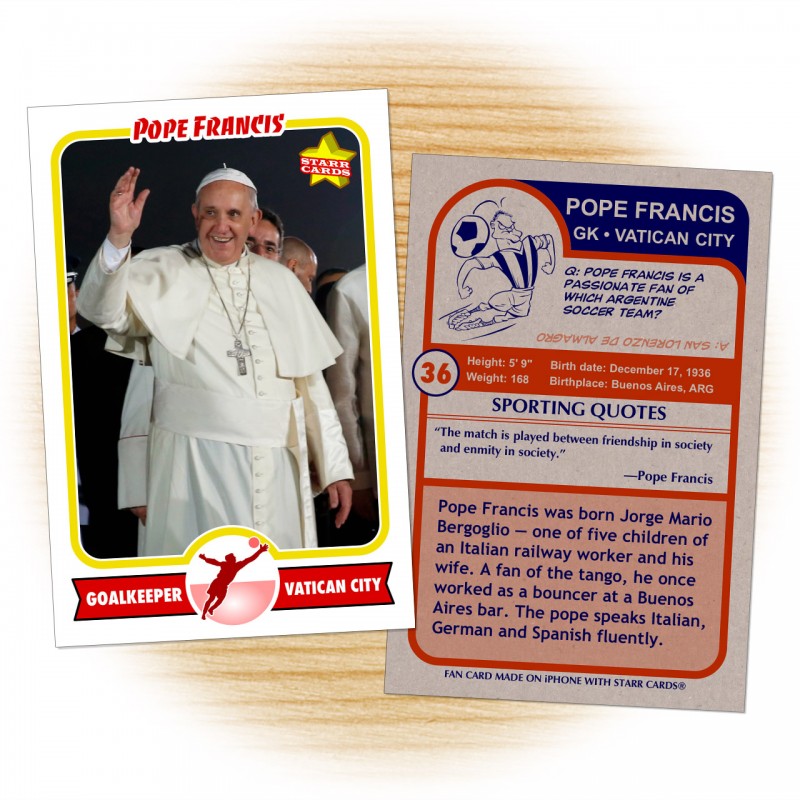 Tim Sullivan, an enterprising Pope Francis fan from Maryland, produced a trading card in anticipation of His Holiness’ visit to the United States. Unlike the Phillies, he honored the pope’s stated sporting preference in making a retro soccer card complete with a cartoon and bio data on the backside.

Francis has met personally with a who’s who of the soccer world since being named Pope Benedict XVI’s successor in 2013. Naturally, the Buenos Aires-born pope has made time for Argentine stars Lionel Messi and Diego Maradona, but he’s also met with Italian greats Gianluigi Buffon and Mario Balotelli.