No single stat captures a goalie’s in-net skills quite like save percentage. While wins are equally dependent on a team’s offense and defense, save percentage lays bare the goalie’s specific contribution — namely, how well they are able to stop shots on goal from finding the back of the net. 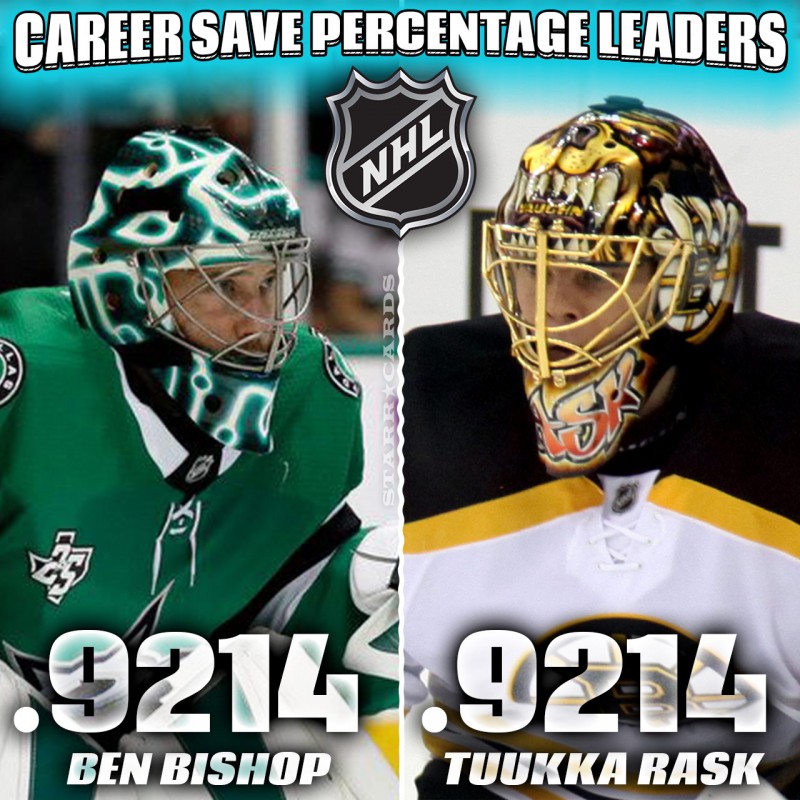 Four active NHL players are among the top ten goalies in career save percentage with a minimum of 250 games played; Ben Bishop of the Dallas Stars and Tuukka Rask of the Boston Bruins, both at .9214, are just fractionally behind former-great Dominik Hasek’s .9223. They are joined by John Gibson (.9204) and Robin Lehner (.9184). Just outside the top ten are Henrik Lundqvist, Pekka Rinne and Sergei Bobrovsky.

Bishop, who has played for five different teams over his 11 seasons in the league, is one of the few American-born players in the NHL record books otherwise dominated by Canadians.

Rask has spent his entire NHL career in Boston, winning the Vezina Trophy for his goaltending during the 2013-14 season when he posted seven shutouts and a .930 save percentage.

Born in Pardubice, Czechoslovakia, Hasek’s NHL career spanned 16 seasons, ending in 2008 with the Detroit Red Wings. In addition to his six Vezina Trophy wins, in 2008 he was awarded the Hart Memorial Trophy for a second consecutive year, becoming the first goaltender to win the award multiple times.