The great history of baseball cards is celebrating its Sesquicentennial anniversary and today, led by Starr Cards, its future has never been brighter. We offer here a look back at the highlights from the past one hundred fifty years with a pictorial timeline. 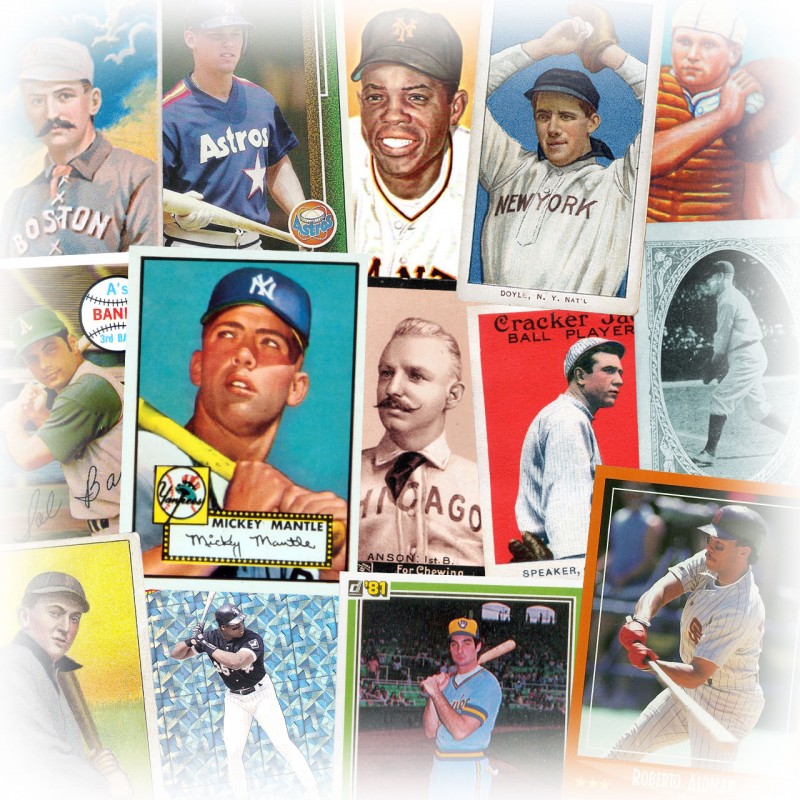 The first new baseball card company of the new millennium is also the first to offer the ability to make your own custom baseball cards directly on a smart phone. Starr Cards Baseball Card Maker debuted in the App Store’s Top Ten for Sports and has been a favorite of baseball card lovers ever since.

In 1994, Major League Baseball expanded to its largest number of licensed card manufacturers by adding Pacific Trading Cards to the list. In 2001, Pacific dropped out of the baseball card business, reducing the number of card companies to four.

On December 23, 1988, Upper Deck was granted a license by Major League Baseball to produce baseball cards. Exactly two months later, it delivered its first case of baseball cards to George Moore of Tulsa’s Baseball Card Store. Upper Deck sold out its baseball cards midway through this inaugural year, then pre-sold its entire 1990 baseball stock before the following year began.

First Set of Baseball Cards Released Under the Score Brand

In 1985, Optigraphics obtained an MLB license and started producing a unique style of lenticular motion cards under the name Sportflics. It released traditional baseball cards under the Score brand starting in 1988, invigorating the industry with better paper quality, action photographs, and improved writing on the backs.

Donald and Russell Weiner founded the original Donruss company in 1954. Its first sports theme cards were produced in 1965, when it created a series of racing cards sponsored by Hot Rod Magazine. In 1981, it began producing baseball cards after Topps’ exclusivity with MLB was successfully challenged by Fleer.

TCMA (The Card Memorabilia Associates or Tom Collier and Mike Aronstein) created the 630-card SSPC set in 1975. According to Aronstein, “I used the 1953 Bowman set as a model. I had always liked the simplicity of that set and the fact that what you got on each card was a picture of a baseball player, period. Nothing fancy. Just a card.” That concept spawned what collectors used to describe and identify the SSPC set: The “Pure Card.”

In 1970, the baseball card world gained a new entry into the market — The Kellogg Company. Kellogg’s released a set of cards that featured 75 of the best players in baseball. Included in boxes of Corn Flakes, the cards were made to appear three dimensional, a relatively novel concept at the time. Kellogg’s intermittently released new 3D sets up until 1983.

Post’s baseball cards were available on thick card stock that could be ordered from the company and were also available singly from cereal boxes. Team sheets were printed on thinner chipboard directly from the Post Cereals Company.

Well established as a gum and candy company, Fleer predated many of its competitors into the business of issuing sports cards with its 1923 release of baseball cards in its “Bobs and Fruit Hearts” candy product. Years later, Fleer signed baseball star Ted Williams to a contract and sold an 80-card set oriented around highlights of his career.

Topps’ first major issue in 1952 is regarded by collectors as one of the greatest baseball card sets of all time. The 1952 Topps #311 Mickey Mantle (his rookie card) is the most valuable card of the Post-War era.

Early in its history, Red Man chewing tobacco advertisements were painted on the sides of barns, featuring an endorsement from baseball player Nap Lajoie: “Lajoie chews Red Man, ask him if he don’t.” From 1952 to 1955, Red Man produced a series of baseball cards, the only tobacco company to do so after 1920.

In 1948 and 1949, the Leaf Candy Company produced crude, boldly-colored sets of baseball, football, and boxing stars. Their 1948 baseball set has the distinction of being the first post-war cards in color.

The National Chicle Gum Company manufactured the art deco Diamond Stars set, along with premiums, between 1934 and 1936. The card backs include either a player bio or playing tip. Cards can be found with blue or green lettering on the back.

In 1933, Goudey produced a 240 card set, known as “Big League Chewing Gum”. These cards were the first to be packaged with gum. Along with the T206 American Tobacco Company and 1952 Topps sets, the 1933 Goudey cards are considered part of the “Big Three” of classic baseball card sets.

In 1912, the manufacturers of Cracker Jack started making toys and prizes to insert into the boxes. In 1914, they made the decision to include baseball cards, which featured players from both major leagues as well as players from the short lived Federal League.

In 1909, the American Tobacco Company introduced baseball advertising cards into their tobacco products with the issue of the T206 White Border Set. The cards were included in packs of cigarettes and produced over a three-year period until the company was dissolved. The most valuable baseball card in history is the Honus Wagner from this set.

The Mayo’s Cut Plug set consisted of 45 cards that featured black and white player portraits. The cards have scant player information — just the player’s name and his abbreviated position. A year earlier, P.H. Mayo was the first company to introduce a dedicated football card series.

Allen & Ginter was a Richmond, Virginia, tobacco manufacturing firm formed by John Allen and Lewis Ginter in 1875. In 1887, the company created the first cigarette cards for collecting and trading. Some of the cards in the series include Charles Comiskey, Cap Anson, Jack Glasscock, and Buffalo Bill.

Peck & Snyder, a sporting goods store in New York, began producing trade cards featuring baseball teams. Peck & Snyder sold baseball equipment, and the cards were a natural advertising vehicle. Little could they imagine that 150 years later baseball players would be able to create their own cards directly on their smart phone!