With their 117-105 victory over the Philadelphia 76ers on Sunday night, the Warriors became the fastest team in NBA history to reach 66 wins. They also became the first franchise to record 53 home wins in a row, besting the ’96 Bulls by nine games.

Klay Thompson led the way for the Warriors, scoring 40 points for the second game in a row. His lopsided two-game stat line: 80 points, 1 assist.

As impressive as the Warriors win total is, the Splash Brothers’ (Thompson and Stephen Curry) offensive contribution to the team — particularly in the realm of three pointers — is even more unprecedented.

Curry broke the previous record of 286 3-pointers, which he set last year, with 24 games remaining. Now with nine games remaining, Curry has a total of 350 treys and still has an outside chance at breaching 400 for the season.

''It would be cool to break Steph's old record because this man is doing things that have never been done before. If we both got 300 in one season, that would be incredibly special.''

Klay Thompson recorded 7 3-pointers versus the Sixers to bring his total to 28 over the past four games. If he’s able to maintain that pace to close out the season, he’ll become the second player (after Curry) in NBA history to surpass 300. Together, the Splash Brothers have drained an NBA record 603 three-pointers on their opponents this season.

The Warriors will have to finish the season 7-2 or better in order to break Chicago’s 72 win total. The good news is six of the games are at Oracle Arena where the Dubs are undefeated thus far. The bad news is they still have two games left with the Spurs, including one in San Antonio. 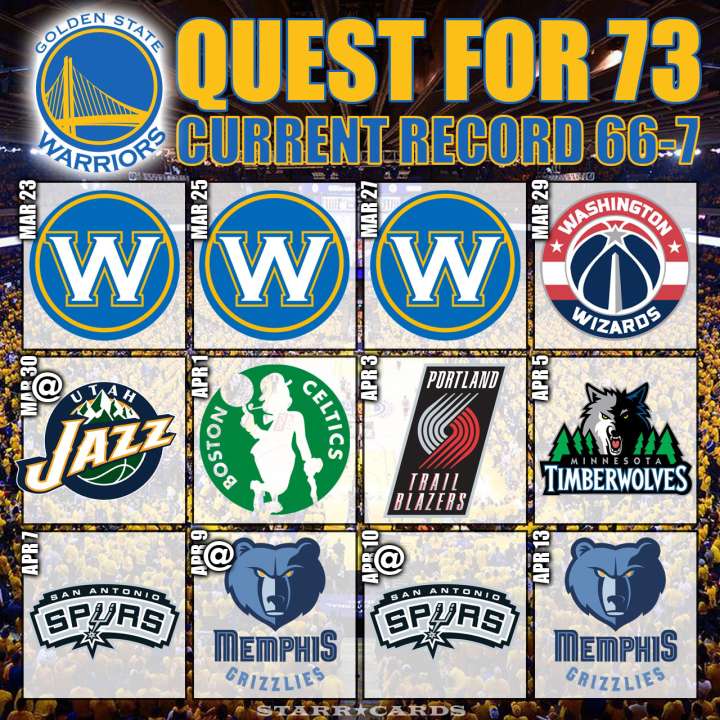 Further complicating the Warriors’ quest for 73 wins is Andre Iguodala’s recent ankle injury that is expected to keep him off the court for several more games. Can Brandon Rush step up his game?