The Lakers have considered trading Nick Young (aka Swaggy P) during the offseason, but might want to think twice after he demonstrated a newfound willingness to play defense — if only against six-foot-nothing rapper/actor/comedian Nick Cannon.

The venue for Young’s “shot” block was the stage at MTV’s improv series Wild N’ Out. Cannon found fault with Young’s fashionably-torn jeans, but the hoopster fired back by pointing out his fiancé Iggy Azalea has sold more albums than the show’s host. 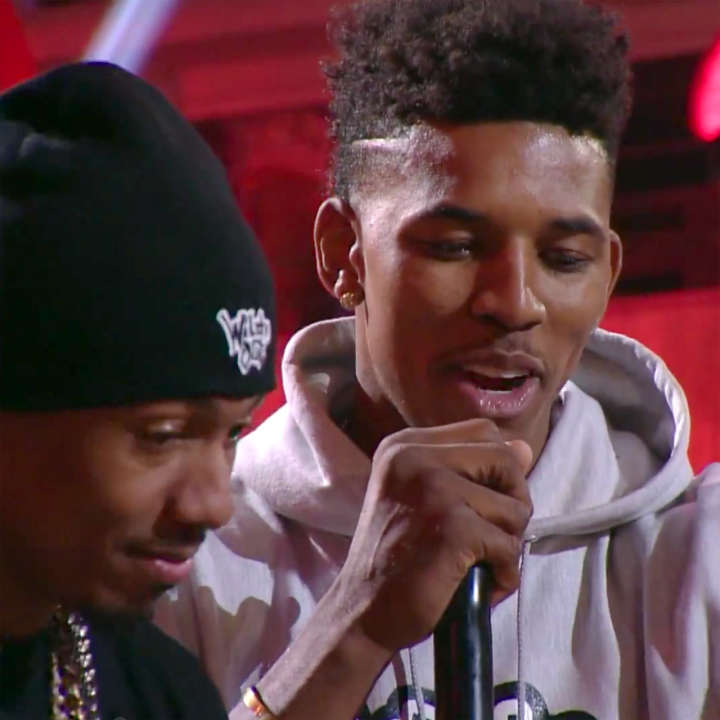 Cannon returned fire by suggesting Young’s nickname should be Nappy P, rather than Swaggy P due to his unkempt hair. Young was preparing his rejoinder when Platinum Squad teammate Traphik stepped in for the freestyle kill.

''You tried to get him, I'm going to get you right after. Why you talk about his chick, because you can't deal with white rappers?''

To understand the full impact of Traphik’s rejoinder, a little background may be necessary.

Cannon was in the news earlier in the week after locking lips on America’s Got Talent with a comely mystery woman pulled from the audience by judge Howard Stern. A couple of days later, he posted to Instagram a widely-ridiculed throwback Thursday pic from his brief relationship with Kim Kardashian.

The Kardashian pic was quickly followed by one with Betty White…

It has been posited that all these past-and-present public pairings were meant to get the attention of former wife Mariah Carey, who is now dating Australian billionaire James Packer. It was when Cannon was married to Carey that he had dustup with Eminem over jibes directed at his wife on the track “Bagpipes from Baghdad” from the album Relapse. Which, at last, explains the double salvo of the “white rapper” reference.

As for Eminem, he too recently starred in a viral video, but not on account of his rapping. The famed Detroit Pistons fan was interviewed by Stephen Colbert on the Michigan public access show Only in Monroe where he assisted the guest host on reading the community calendar.