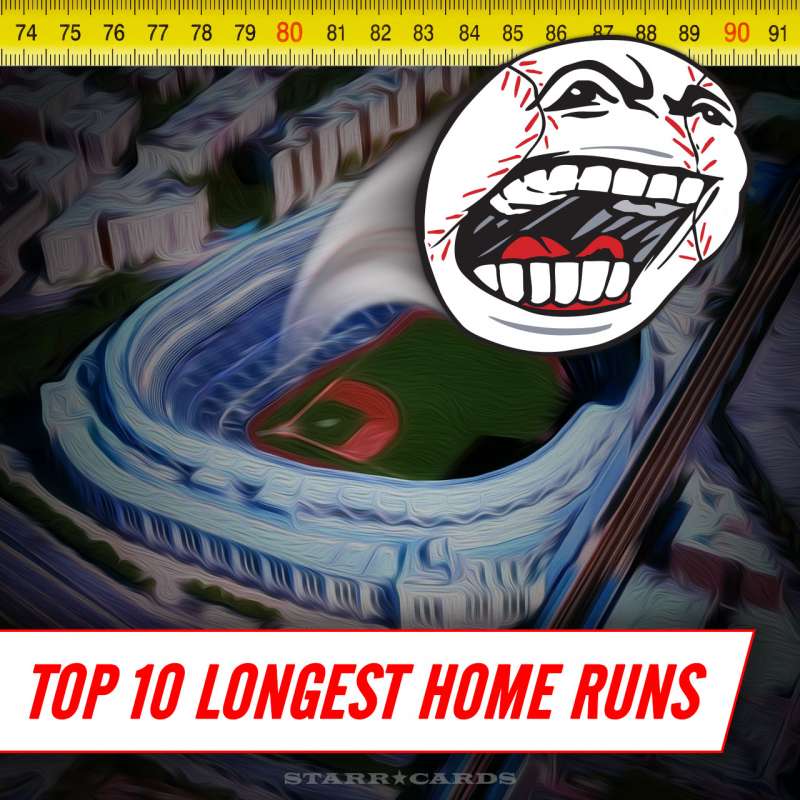 Legendary blasts off the bats of Babe Ruth and Mickey Mantle come in at No. 1 and 2 for the longest homers, but neither of the epic hits occurred at Yankee Stadium. Interestingly, of the tens of thousands of round trippers that have been tallied in the Bronx, none of them make to cut for inclusion on the top ten longest list.

Adam Dunn appeared in just 44 games for the Arizona Diamondbacks, but during his stint in the desert he managed to set the standard for a long ball at Chase Field. His 40th home run and 100th RBI of the 2008 season came off Colorado Rockies pitcher Glendon Rusch, and was estimated at 504 feet after bouncing off the center field awning.

When he was playing with the Miami Marlins, slugger Giancarlo Stanton took advantage of Coors Field’s thin air to blast a 504-foot homer on Aug. 6, 2016. His moon shot still stands as the longest homer since MLB installed Statcast in all stadiums in 2015.

Mo Vaughn, the 1995 American League MVP with the Angels, was never able to return to form after being acquired by the National League’s New York Mets in 2001. In 2002, he did manage to belt the longest ball in Shea Stadium history with a blast that bounced high off the scoreboard.

Jim Thome retired having hit 612 home runs over the course of his MLB career, the longest of which came on July 3, 1999 at Progressive Field. In 2014, the Indians erected a statue of their former slugger near the landing site of his 511-foot shot.

Darryl Strawberry hit two 1998 Opening Day homers for the New York Mets while playing on the road at the Expo’s Olympic Stadium. The first round tripper (which was later projected at 525 feet) hit the lights, causing Strawberry to pause at second base before being waved ahead.

The New York Times originally reported Dave Kingman’s park-exiting home run at Wrigley Field at 630-feet, while subsequent estimates had it traveling 573 feet. Still later, the distance of his April 14, 1976 rocket was reduced to a still very-impressive 530 feet.

Dunn’s second appearance in our top ten came on Aug. 10, 2004, when he obliterated a fastball from Jose Lima at Dodgers Stadium. The longest of the career-high 46 homers he collected that season sailed more than 100 feet beyond the 404-foot centerfield wall.

Over the course of his storied career, Pittsburgh Pirates slugger Willie Stargell sent eight balls sailing over Forbes Field’s 86-foot high roof in right field. But his longest home run — estimated at 535 feet — came on May 20, 1978 at Montreal Stadium.

Mr. October’s longest home run came in July of 1971 at the All-Star game in Detroit. Facing Pittsburgh Pirates hurler Dock Ellis who had given up only 4 home runs over the first half of the season, Oakland Athletics outfielder Reggie Jackson launched a ball that struck the transformer atop Tiger Stadium’s roof.

Mantle’s April 17, 1953 home run at Washington’s Griffith Stadium is listed by some as the longest home run ball of all time. The Yankee’s PR director measured it at 565 feet using a tape measure, while later researchers have suggested it travelled a somewhat shorter distance.

Ruth’s 575-foot dinger at the Detroit Tigers’ Navin Field in Detroit tops our list despite the inherent sketchiness of trusting a measurement made almost a century ago.