Odell Beckham Jr.’s cousin is fast making a name for himself (and just plain fast for that matter). Terron Beckham missed his senior year in high school, and never played a snap of college football, but now at 23 years of age the personal trainer/fitness model is making a run at the NFL.

Build with each other, motivate each other, keep the grind going.. You don't know what's going on in someone's life. Help them by giving them motivation in what they want to do, and stop telling people what they can't do. I'm tired of seeing these hog mogs telling people what they can't accomplish.. Those cyber warriors that always have to call something or someone out .. This post right here is for you..call me what you want boss call everyone else what you want and tell them what they can't accomplish. We are still going to grind, still get after it heavy, and still stay ahead of you. #watch #us .. #fitness #fit #aftermathklan #beast #nyc #supersayiangodsupersayian #badass #innerarmour #shred #cutting #bulk #gymlife @innerarmour

Those who doubt Beckham’s chances of getting signed have clearly never spent a day in the gym with him.

On Thursday, Beckham turned plenty of heads at his NFL pro day workout. His numbers read like something generated by a Madden cheat code, or Marvel superhero profile:

''Today was freaking great. I feel so good about my pro day even though I still think I could of done better. But I am happy after today, everything else is in God's hands.''

Representatives from the New York Giants, Oakland Raiders and New York Jets were present for Beckham’s tour de force. Now it’s just a waiting game for the 5-foot-10, 230 pound running back to see if he gets a call during this month’s NFL draft. In the meantime, you can find him in the gym getting in his reps…

IT’S IN THE CARDS

Beckham’s pro day performance was significant enough to motivate one enterprising fan on Imgur to assemble a virtual football card of the insanely toned athlete complete with mini cartoon and motivational quote. 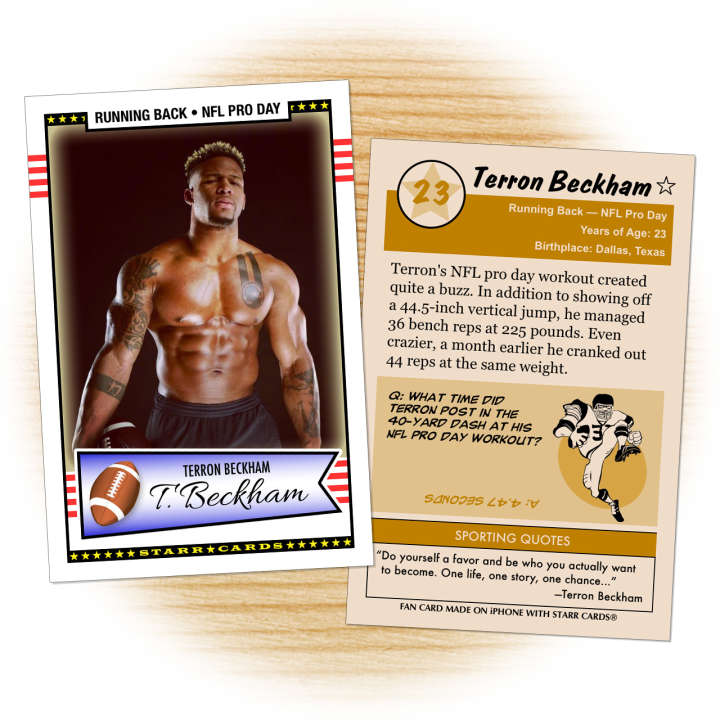