Almost everyone is familiar with the maximum number of players that a team can have playing in each of the major sports: in basketball you get five; hockey, six; baseball, nine; and soccer/football, eleven. 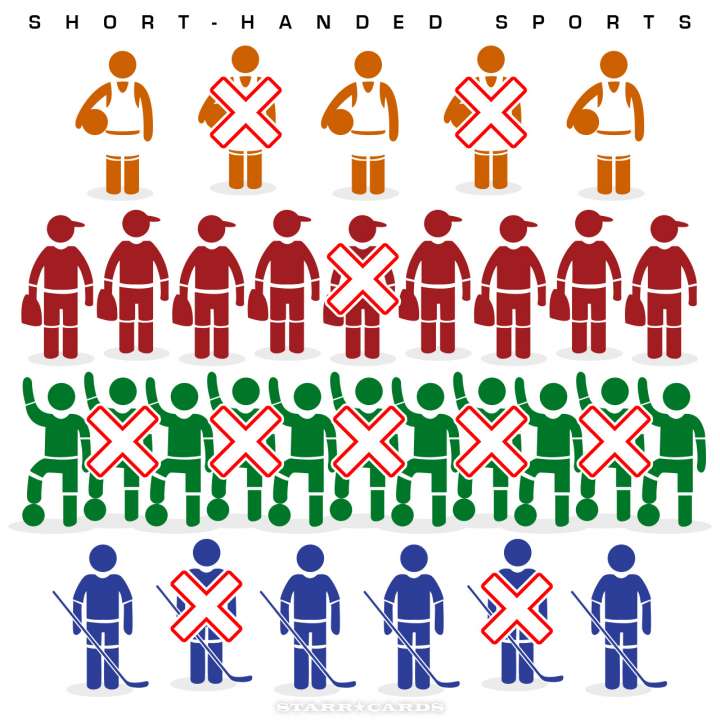 Far fewer are those knowledgeable of the minimum number required to keep playing in situations where multiple players have been lost due to ejections, penalties, substitutions or injury.

Below, we present some of the most extreme examples of team’s playing at less than full power…

During the 2017-18 NCAA basketball season, Alabama’s entire bench was ejected when they came on the court to join a fracas in their game versus Minnesota at the Barclays Center. Then, Dazon Ingram fouled out, and shortly thereafter, John Petty got injured.

The Crimson Tide were compelled to finish out the game with just three eligible players. Minnesota won the game 89-84, despite being outscored 32 to 26 while being up a man (then two). Bama’s Collin Sexton put on an offensive show with 40 total points, including 19 while playing 3-on-5.

Unlike NCAA rules, the NBA requires five players to take the court, with no exceptions.

b. In the event that there are only five eligible players remaining and one of these players is injured and must leave the game or is ejected, he must be replaced by the last player who was disqualified by reason of receiving six personal fouls. Each subsequent requirement to replace an injured or ejected player will be treated in this inverse order. Any such re-entry into a game by a disqualified player shall be penalized by a technical foul.

While not common, MLB teams are by no means unfamiliar with occasionally running out of pitchers over the course of a marathon game or blowout. When this happens, the manager is forced to send a position player to the mound.

In one such example from 2015, not one, but two Cleveland Indians position players were called upon to pitch. In the 9th inning of the Tribes’ 17-0 loss to the Chicago Cubs, David Murphy had to relieve fellow outfielder Ryan Raburn after his arm — unaccustomed to pitching — gassed out.

In the opinion of the International F.A. Board a match shall no be considered valid and shall be abandoned by the referee If fewer than seven players remain on either team.

However, if a team has fewer than seven players because one or more players has deliberately left the field of play, the referee is not obliged to stop the match and the advantage may be played. In such cases, the referee should not allow the match to resume after the ball has gone out of play if a team does not have the minimum number of 7 players.

In the NHL, short-handed play occurs in almost every game, but the rules stipulate that a team may not have fewer than four players (including the goaltender) on the ice at any point during the game.

In a December 5, 2014 games versus the Winnipeg Jets, Colorado Avalanche coach Patrick Roy pulled goalie Reto Berra halfway during a 5-on-3 power play to effectively make it 6-on-3. The Jets survived the offensive onslaught and won the game 6-2.