Starr Cards Infographic: Percentage of MLB players from USA, Dominican Republic and every other country

Starr Cards Infographic: Percentage of MLB players from USA, Dominican Republic and every other country

The oldest of the four major professional sports leagues in the United States and Canada, Major League Baseball has been getting steadily more international in its makeup. This season players from a record 22 countries are active on MLB rosters. 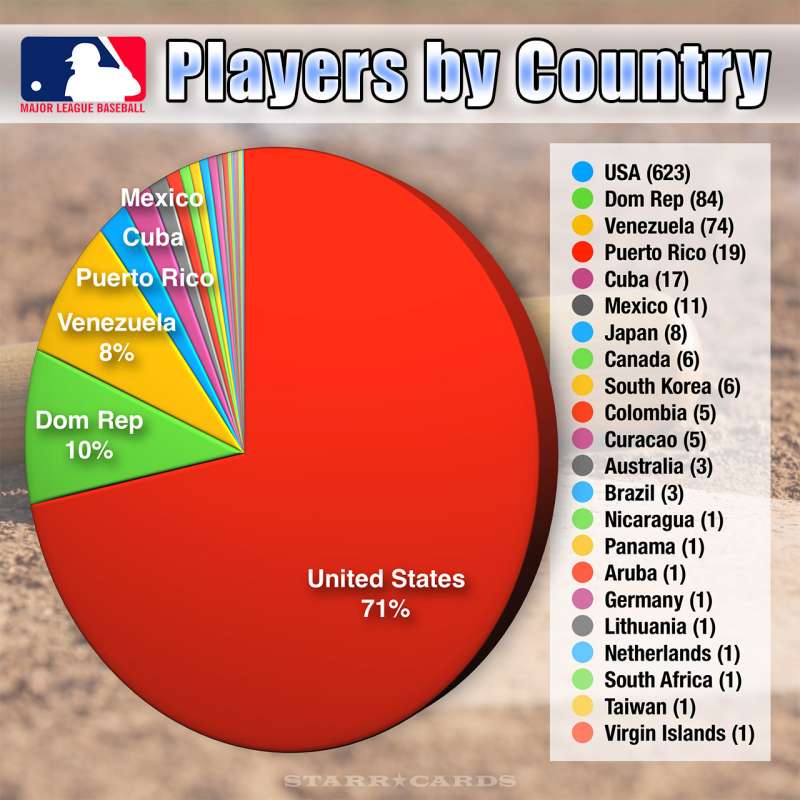 While nearly three-quarters of MLB players still hail from the United States, the past couple of decades have seen an influx of players from all corners of the globe and in particular regions south of the border with the Dominican Republic and Venezuela leading the way.

Below, we present the total number of players from each country and the current points leader from each…

Fully 71.4% of the MLB’s players still come from the country in which the league originated. Exceptional players among the current crop of Americans include past MVP winners Giancarlo Stanton, Mike Trout and Bryce Harper, and current MVP candidate Mookie Betts.

Eight-time All-Star and Gold Glove catcher Yadier Molina, who has called pitches for St. Louis since 2004, leads a contingent of 19 players from Puerto Rico.

Mexican-born pitcher Marco Estrada has enjoyed the best stretch of his MLB career while plying the mound for Toronto over the past three seasons, where countryman Roberto Osuna knocks opponents down in the ninth inning.

With all the big name foreign-born players that have come over to play baseball in the States, few have ever attracted the attention of Shohei Ohtani, the dynamic two-way phenom signed by the Los Angeles Angels. Ohtani is already the biggest name among a contingent of Japanese players that include big-market pitchers Yu Darvish and Masahiro Tanaka.

Of the remaining fifteen countries, Canada and South Korea have six players each, while Colombia and Curacao each boast five. America’s neighbor to the north has three well-known veterans in Joey Votto, Justin Morneau and Russell Martin.