For as many triple-doubles as Russell Westbrook and LeBron James have racked up over past seasons, neither player has ever recorded an elusive quadruple-double — a single-game standard that to this day only four NBA players have officially achieved. 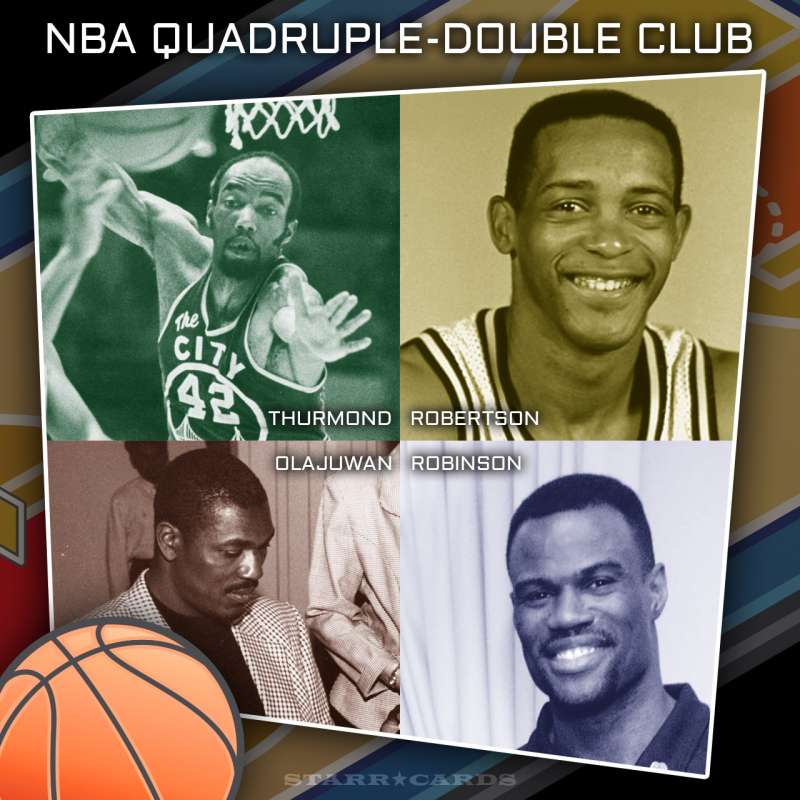 Few doubt that both Bill Russell and Wilt Chamberlain managed more than one quadruple-double during their NBA careers, but as blocks and steals weren’t officially tallied until the 1973-74 season, their statistical masterpieces are not recorded alongside the later players to accomplish this feat.

Russell posted what is likely the earliest quadruple-double in a Boston Celtics road game against Chamberlain’s Philadelphia 76ers on January 26, 1961, and he did it the defensive way — with double digit steals rather than assists.

According to several unofficial box scores of the time, Chamberlain had three quadruple-doubles in the playoffs during the 1960s, but his finest all-around game may have come at the end of the 1967-68 regular season when he reportedly recorded the only quintuple-double in NBA history. What is known for sure is that he had 53 points, 32 rebounds and 14 assists. What is rumored is that he may also have had as many as 24 blocks and 11 steals.

Seven-time All Star Nate Thurmond averaged a double-double over the course of his 15-year NBA career, with 15.0 points and 15.0 rebounds per game. The Hall of Fame is the first player in NBA history win an official quadruple-double, a feat he achieved in the first game of the 1974-1975 season in his debut with the Chicago Bulls.

In 1986, San Antonio Spurs shooting guard Alvin Robertson was named NBA Defensive Player of the Year award, but it was his all-around performance in a game against the Phoenix Suns that put him in even more exclusive historical company. Robertson’s 20 points were not a team high in the game, but his 11 rebounds, 10 assists, and 10 steals made him just the second player to officially score a quadruple-double.

Houston Rockets center Hakeem Olajuwan scored his first quadruple-double in a game against Robertson and the Milwaukee Bucks, less than a month after posting a boxscore of 29 points, 18 rebounds, 9 assists and 11 blocks. The Rockets had released a revised boxscore from Olajuwan’s earlier effort that awarded him an additional assist, but were overruled by the league office.

It’s been almost 25 years since the last recorded quadruple-double which came from Hall of Fame center David Robinson. The big man led the San Antonio Spurs over the Detroit Pistons while shooting 60 percent from the field and collecting 10 each rebounds, assists and blocks.