Perhaps no stat speaks as viscerally to a basketball player’s all-around game like the triple double, and for more than half a century no one had been as adept at racking them up as Hall-of-Famer Oscar Robertson.

A photo posted by RetroRoundball Until Rapture (@thisdayinhoops) on Nov 24, 2016 at 9:25am PST

Robertson’s 1961-62 season was one for the ages. In just his second year in the NBA, the Cincinnati Royals point guard averaged a triple-double with 30.8 points, 12.5 rebounds, and 11.4 assists per game. Last week, one present-day All Star “The Big O” matched this feat, and another came pretty darn near.

Oklahoma City point guard Russell Westbrook led the league in triple-doubles for the third straight year, tallying an NBA-record 42 of them this season. More incredibly, he became only the second player to average a triple-double with 31.6 points, 10.7 rebounds, and 10.4 assists per game. 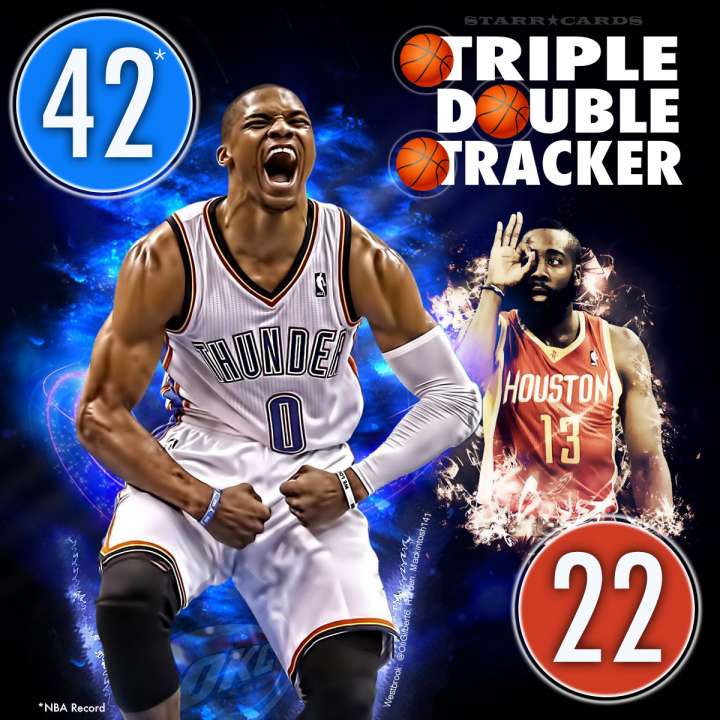 Houston Rockets point guard James Harden, with 21 triple-doubles to his credit, septupled his total from a year ago. He averaged a double-double with 29.1 points and 11.2 assists per games, and wasn’t too far off doubled digits in the rebounds department at 8.1 per contest. In another statistical feat, he became the first first player in NBA history with 2,000 points, 900 assists and 600 rebounds in one season.

Fittingly, Westbrook and Harden — the leading MVP candidates — will now face each other in the opening round of the playoffs.

Westbrook’s last triple-double of the regular season came on April 9 in a one-point win over the Denver Nuggets, with 50 points, 16 rebounds, and 10 assists. The MVP candidate leads the league in scoring and is third in assists per game.

Harden finished the regular season with a triple-double versus the Minnesota Timberwolves, with 27 points, 10 rebounds, and 12 assists. The former Arizona State star led the NBA in assists per game and was tied for second in scoring.

Just this season, Westbrook passed Fat Lever, LeBron James, Larry Bird and Wilt Chamberlain in career triple-doubles to move into fourth place all time. Jason Kidd’s tally (107) will have to wait until next year. Harden, with 31 career triple doubles, is now tied with John Havlicek for tenth place.