A postgame jersey swap between competing soccer players has been a staple of the sport dating back to the 1930s, and more recently the custom has made inroads in American football. But a basketball-soccer trade of jerseys based on social media followers made its debut just last week, initiated by Golden State Warriors point guard Steph Curry.

Curry sent his signed No. 30 jersey to FC Barcelona forward Lionel Messi to congratulate him on reaching thirty million followers on Instagram. Golden State’s star see similarities in what he and Messi bring to their respective sports.

''I'm trying to do some fancy things out there with both hands, making crossover moves and having a certain flair to my game and that's definitely the style Messi has when he is out there in his matches.''

Muchas gracias al fenómeno @stephencurry30 por mandarme su camiseta firmada con el número 30 para felicitarme por los 30 millones en Insta. ¡ cuando llegues a 10 millones te mando la mía! 😜👍🏻 // Thanks so much to the great Stephen Curry for sending me a signed jersey to congratulate me for reaching 30 million followers on Instagram. As soon as you get 10M I'll send you mine! 😜👍🏻

Messi, who wears No. 10 for Barca, promised to reciprocate if and when Curry hits ten million followers. The reigning NBA MVP has a ways to go, as he currently sits at 6.1M followers. By comparison, LeBron James has 16 million.

THE SNUB THAT WASN’T

A couple years ago, Messi made news for appearing to rebuff Stephan El Shaarawy’s overture for a jersey swap after a UEFA Championship League game. But the apparently-snubbed AC Milan striker was quick to correct perceptions via Facebook, explaining that he had asked Messi to exchange shirts in the dressing room — and they did. 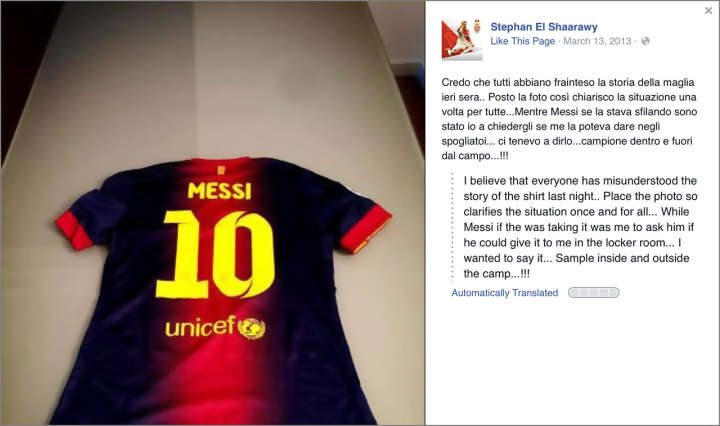