With their 112-101 victory over the San Antonio Spurs on Thursday night, the Warriors became just the second team in NBA history to reach 70 wins. Last week, the Dubs’ record steak of 54 home wins in a row was ended by a scrappy Boston Celtics squad.

Against the Spurs, Stephen Curry led the way for the Warriors with 27 points. Harrison Barnes added 21 on 8-of-13 shooting from the field.

Curry broke the previous record of 286 3-pointers, which he set last year, with 24 games remaining. With three more treys against the Spurs, Curry brought his season total to 385. With three games remaining, he will have to average five 3s per game to reach the once unthinkable total of 400.

''Two teams in the history of this game have reached where we are right now. It's a proud moment and something that should be recognized.''

Thompson has 268 3-pointers for the season, and still harbors hopes of surpassing Curry’s old record. Together, the Splash Brothers have dropped an NBA record 653 three-pointers on their opponents this season.

Two games ago, against the Portland Trailblazers, the Warriors became the first team to exceed 1,000 3-pointers in a season and now have 1,037 for the year (the 2014-15 Houston Rockets owned the previous record with 933).

The Warriors will have to finish the season 3-0 in order to break Chicago’s 72 win total. Next up, they have a back-to-back road games versus the Memphis Grizzlies and Spurs, before finishing with the Grizzlies at home. 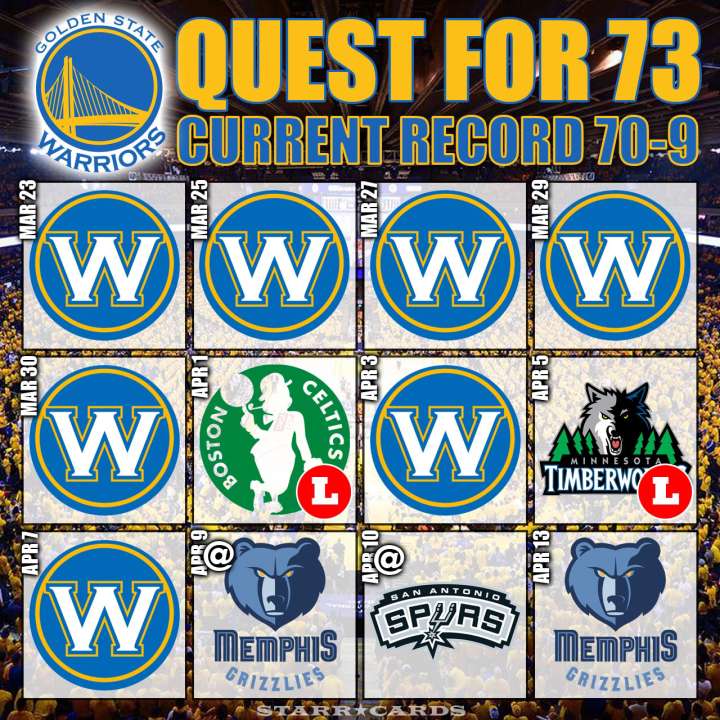 While the oddsmakers don’t like the Warriors chances (25%) to reach 73, they should be near full strength to finish the season barring any new injuries.

Not surprisingly, opinions are divided as to how the Warriors should approach the final three games. To rest or to run, that is the question…