For some time now, Aaron Kyro, the founder of Braille Skateboarding, and his elite coterie of skating friends, have been trying out new-fangled boards they find on EBay, or are fashioned by themselves or fans.

Most of the box breaks and subsequent test rides of the experimental skateboards featured below were filmed at Fremont Skate Park, so keep your eyes open for the famed fun-loving skaters when you’re visiting the Bay Area. 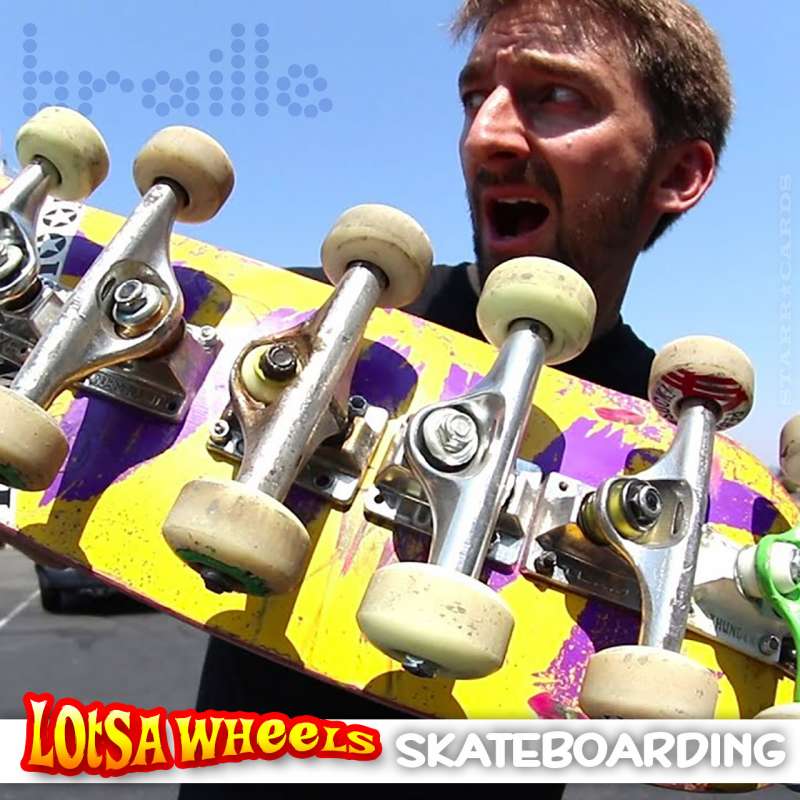 The vast majority of the boards featured in Braille’s video series sport the traditional four wheels, but they’ve also skated boards with 6, 8, 14, 36 and even 80 wheels!

On flat ground, the Stair-Rover skates like a traditional longboard, but when the surface gets rough – cobblestones or uneven paving, for example – the chassis goes to work. It reduces impact and keeps you moving. It’s that same mechanism that gives the Stair-Rover™ its name. Stair-Rover is a longboard unlike any other.

The Stair-Rover’s unique 8-wheeled mechanism makes the board equally at home cruising smooth pavements or gliding down stairs.

Silber narrated a game of S-K-A-T-E (H-O-R-S-E for skateboarders) with participants riding a 14-wheeled Flowboard that he had found on EBay.

After constructing an earlier “Centipede” skateboard with six trucks, Braille fans demanded more and Kyro obliged. He managed to squeeze a total of ten trucks on a board for a 20-wheeled Centipede version 2.0.

Beneath the Rockboard Descender’s deck are four heavy-duty triple-wheel sets (36 wheels in total) surrounded by a rubber tread. The treads tilt both backward and forward for stability and smooth transfers between different surfaces.

What do you get when you glue 20 Hot Wheel cars to the bottom of a skateboard? An 80-wheeled skateboard with a super-low profile. Unfortunately, you do not get a very rideable board, as the tiny Hot Wheel axels and tires were never designed to support 150-pound skaters.