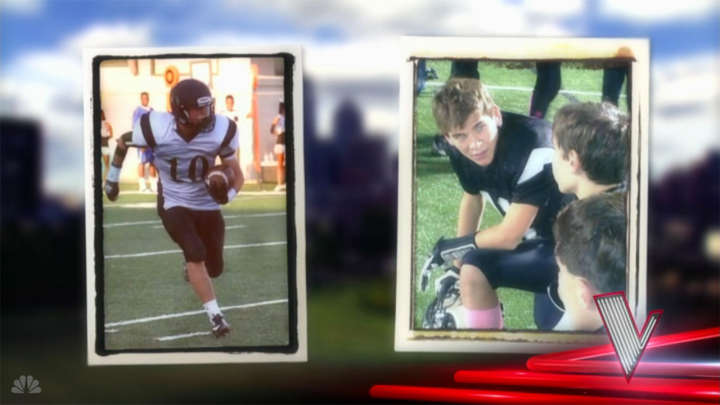 As a freshman at Kennesaw Mt. High School, Zach Seabaugh played football for the Mustangs and even had profile page on Hudl, the popular athlete scouting website. Then, like a real-life version of Finn Hudson from Glee, Seabaugh risked alienation from his friends to pursue his passion for singing.

Now a 16-year-old junior, Seabaugh secured a spot on Blake Shelton’s team during the blind auditions on The Voice, when he sang Sam Hunt’s “Take Your Time“. The Georgia native’s love for country music caused him to select Shelton over Pharrell Williams and Adam Levine who wondered if the singer was superhuman.

''Are you superman? You look like Superman and that’s not a 16-year-old’s voice. That's Superman's voice.''

This past Monday on The Voice, Seabaugh moved deeper into the competition when he won his battle round performing “I’m Gonna be Somebody” by Travis Tritt.

Seabaugh and his battle round opponent, Tyler Dickerson, practiced with Shelton and guest-mentor Brad Paisley, before facing off on stage. Seabaugh’s performance again elicited a comparison to Superman, this time from judge Gwen Stefani.

''You're 16 years old and how deep and rich your voice is. How is that happening, parents? Like, he really is the Superman of singing.''

THE CLIMB TO THE SEMIFINALS

Week by week, Seabaugh continued advancing on The Voice with pitch-perfect performances of “Brand New Girlfriend”, “My Love”, “Are You Gonna Kiss Me or Not”, and “Crazy Little Thing Called Love”.

For his performance in the semifinals, Seabaugh gave his take on Miley Cyrus’ “The Climb”, but was unable to progress beyond the final six.