Could Isaiah Hartenstein be Germany’s next Dirk Nowitzki or Detlef Schrempf? After turning down numerous offers from prestigious U.S. college programs and top European clubs such as Barcelona and Real Madrid, the 18-year-old hoopster opted to start his professional career with Lithuanian champion Zalgiris Kaunas. 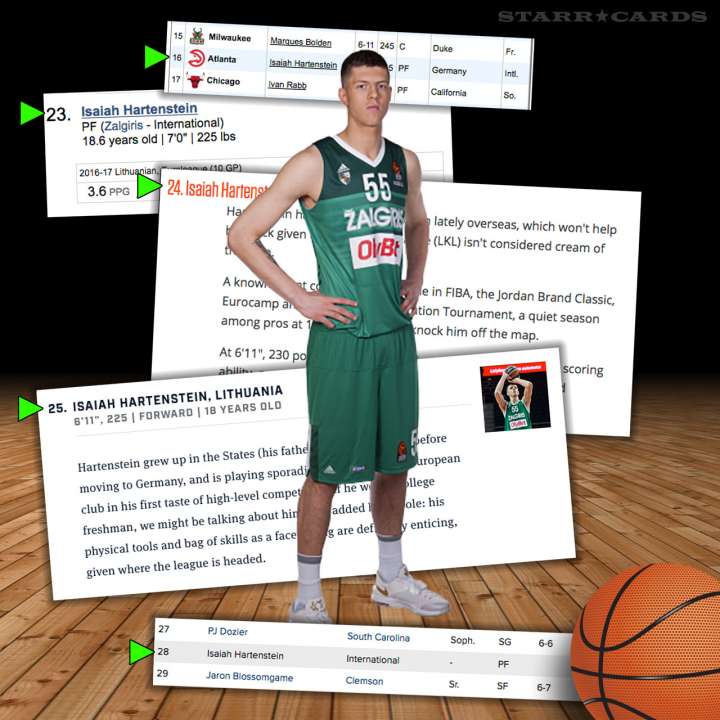 ''I think without my dad, things would have been insanely difficult. He taught me early on that first you have to achieve something. I haven't achieved anything on a professional level.''

In basketball-crazy Lithuania, Hartenstein took further steps toward his ultimate goal — playing in the NBA. VICE Sports, which accompanied Hartenstein during his last days in Germany, dove into the challenges he faced being on the cusp of a professional basketball career, and learned more about an tightly knit father-son relationship.

Hartenstein has been steadily inching up the mock draft rankings over the past year, and ahead of tomorrow night’s NBA Draft, the 6-foot-11 230-pounder currently projects as a late first round pick.

Extraordinarily talented lefty big man with tremendous versatility. Does things that 17-year olds his size aren’t normally supposed to do. Sky is the limit as his combination of physical tools, skills and upside make him one of the most intriguing long-term prospects in Europe. On the downside, looks like he’s used to doing whatever he wants. Needs to be reeled in by a good coach and figure out how to play efficient basketball. —DRAFT EXPRESS

The fluid 6’11 center could be the next international big man NBA scouts love, following in the footsteps of Kristaps Porzingis and Dragan Bender. —SB NATION

If you are looking for the next big thing coming out of Europe over the next years, a player who could have a huge impact in the NBA, look no further than Isiah Hartenstein of Germany who has become in a few short years the best prospect since Dirk. —NBADRAFT.NET

He’s a very good athlete by European standards and plays with good energy and desire. His offensive game shows a lot of intrigue as he can get the basket as well as knock down mid-range shots. His ability to get out in transition and make plays at his size also gives him a lot of intrigue. —HOOPS HYPE

A powerful and skilled post player who looks like the next great big man to come from Germany. Has long arms, broad shoulders and good athleticism to go along with a soft touch around the basket and an expanding offensive game. Still young and unrefined. Will have to make a big adjustment to the NBA game. —NBA DRAFT ROOM