Patrick Kane recently lost his dance-off rematch with teammate Jonathan Toews at the Blackhawk’s annual convention in Chicago. Reprising the “Kaner Shuffle” simply wasn’t enough to repeat against Toews who abandoned last year’s “Tazer Moonwalk” for an improvised waltz about the stage.

Humiliated by the defeat, and still stinging from dropping the NHL Western Conference Finals to the LA Kings, Kane hightailed it out of The Windy City to nurse his ego back home in upstate New York. The night before last, he initiated the rehabilitation of his shattered confidence by joining a rec-league hockey game with the Piranhas Hockey Club in Buffalo.

So this Kane guy showed up to the @Piranhas3DPuck game last night… he was pretty good pic.twitter.com/vX5WaXTNYS

Kane scored 10 points for the Piranhas, helping them crush Essex St Pub 13-5. So far, so good. 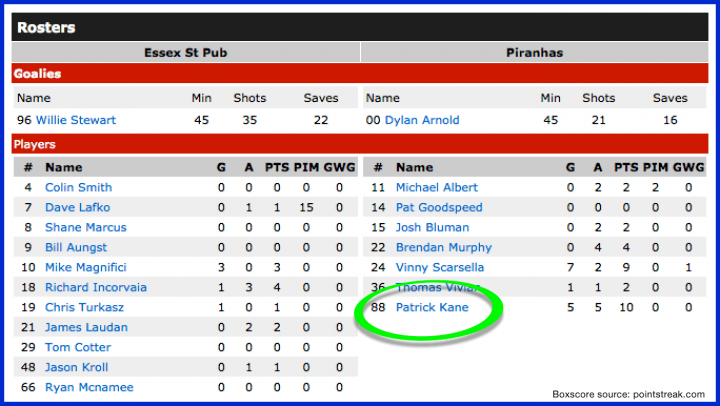 But what about Kane’s dancing? Unreliable sources tell us that, since he is still in New York, he is planning to drop in on Juan Carlos of America’s Got Talent fame to pick up some flashier dance moves…