Fan’s beard is a Nationals’ treasure

Fan’s beard is a Nationals’ treasure

Since biblical times, beards have carried a regal, manly-man appeal for their wearers. Who can forget Charlton Heston’s mighty chin wig from “The Ten Commandments” as he parts the Red Sea, or the lion-bodied, human-headed lamassu of ancient Assyria with their tightly-curled beards immortalized in stone carvings.

In the modern era, sports figures have periodically grown beards to bring forth their inner warrior or as team-building exercise. Occasionally, fans have also gotten in on the fun. Case in point, the beard of a Nationals’ supporter — molded into a cursive “W” for Washington — that took Instagram by storm this week.

The fan’s hairy homage to the Nats may be a portent of good things to come for a franchise that has never won a World Series (not even in their former incarnation as the Montreal Expos) — two of the past four World Series winning teams have had beards play a central role in their success.

Brian Wilson’s beard saga eclipses all others in the annals of baseball. An instrumental reliever in the San Francisco Giants run to the 2010 World Series title, Wilson shared the media spotlight with his beard which had its own dedicated Facebook and Twitter accounts. The beard managed to hijack the focus of an All-Star Game interview when its occupants were discussed.

''Well, there's garden gnomes cutting down trees and apparently there's an Irish gig lady dancing. I haven't met her yet, but she's in this quadrant”
— Brian Wilson, on what was going on in his beard

Wherever the beard went, reporters were sure to assemble. Opposing batters may have feared the beard, but the media was attracted to it like moths to a curly black flame.

Wilson and his beard made three appearances in the 2010 World Series, allowing no runs. He/they recorded the save in the series-clinching Game 5 as the Giants won their first World Series since 1954. The following season, during spring training, ESPN’s Sports Center produced a video clip celebrating the beard’s ability to instill nausea when provoked.

THE BEANTOWN BEARDS OF 2013

Inspired by Jonny Gomes arrival at spring training with a fierce display of facial hair, the 2013 edition of the Red Sox rallied around beard growth all the way to the postseason.

A downside to having a bushy tangle hanging from one’s jaw is that it provides an all-too-tempting target for pulling, twisting and yanking.

The beloved beards of Boston were even given nicknames, and a pictorial reference chart was provided by the franchise via their Twitter account. The hashtag #GetBeard became a trending meme. 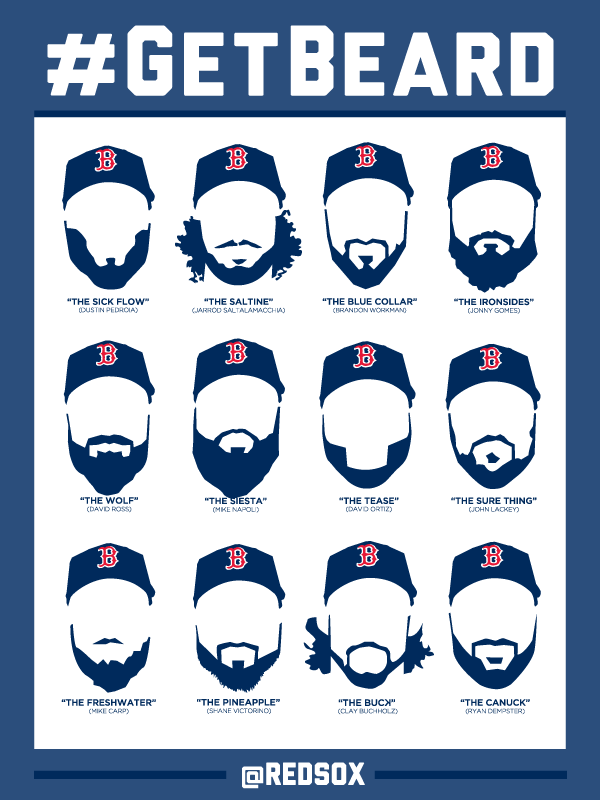 After the Red Sox won the World Series — defeating the St. Louis Cardinals in six games — Gillette auctioned off shaved hair balls from David Ortiz and Shane Victorino on behalf of Movember, a men’s health charity.