Earlier in the week, scouts from twenty-eight of thirty MLB teams showed up for Tim Tebow‘s baseball workout at Dedeaux Field on the University of Southern California campus… and they came away with thirty-eight different impressions.

More than one scout left the session convinced that the it had been nothing more than a publicity stunt and a complete waste of time. At the other end of the spectrum were those who posited that Tebow’s natural athletic gifts, with continued refinement, give the former NFL quarterback a legitimate shot at jumping leagues.

Longtime Tebow cheerleader Skip Bayless falls into the bullish camp (surprise, surprise) in appraising the 29-year-old’s chances of getting signed to a contract. If nothing else, Tebow’s considerable evangelical fan base could fill empty seats at ballparks were he given a shot in the minor leagues.

If there was a consensus among the scouts, it was in regards to Tebow’s undeniable power at the plate, although he struggled with off-speed pitches during live batting practice when facing MLB free agents Chad Smith and David Aardsma.

While Tebow showed decent speed for a 6-foot-3 245-pounder, clocking 6.6 seconds in the 60 yard dash, his running form led one clever Viner to compare it with the waddle of Oregon’s mascot.

Tebow, who led the Florida Gators football team to national championships in 2007 and 2009, admitted to feeling nerves in front of this week’s gathering that doubled in size due to media attendance. True to form, the eternal optimist didn’t let skepticism about his baseball prospects dampen his enthusiasm or effort.

''This is something I love to do and I think when you have that mindset, it lets you be free to just go out there and compete.''

If Tebow manages to defy the odds and one day takes the field for a big league team, he will be joining elite company. Only two other former Heisman Trophy winners — Vic Janowicz and Bo Jackson — have played in both the NFL and MLB.

While attending high school in Ponte Vedra, Florida, Tebow was such a standout talent at quarterback, his baseball skills were largely overlooked. He followed his sophomore year on the diamond with a breakout junior season, batting .494 with four home runs for the Nease Panthers, and led the team to the Final Four in the state playoffs. 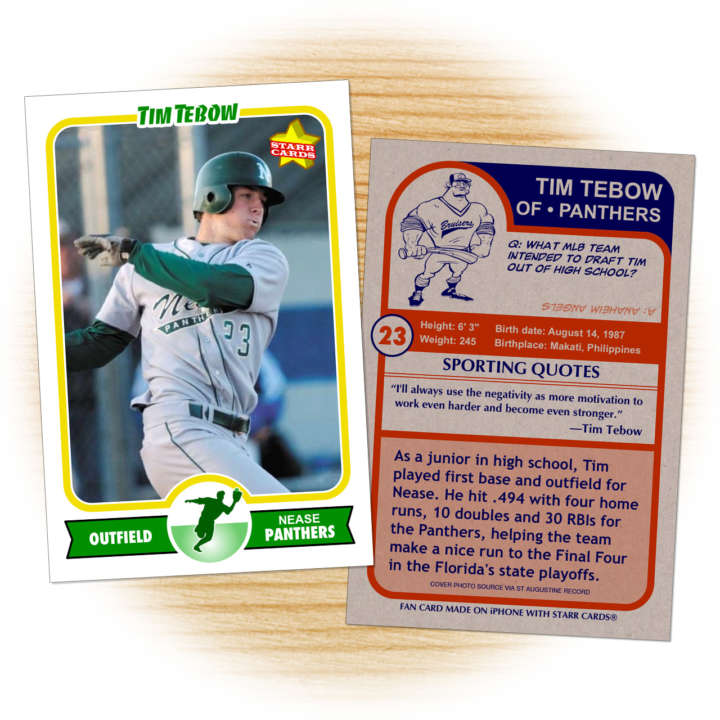 Boo Mullins, who was Tebow’s baseball coach at Nease, recalls the hulking teen crushing a home run more than 460 feet at Pedro Menendez High School in St. Augustine. The ball rocketed out of the park and soared over busses arrayed at the back edge of the parking lot.

With ten years of additional muscle and weight having been added to his frame, one marvels at what might transpire should Tebow ever get comfortable with big league pitching.