Muhammad Ali’s popularity extended well beyond the confines of the boxing ring and fight fans. Arguably, the most popular athlete in history, his passing elicited an outpouring of tributes from across the sporting spectrum. 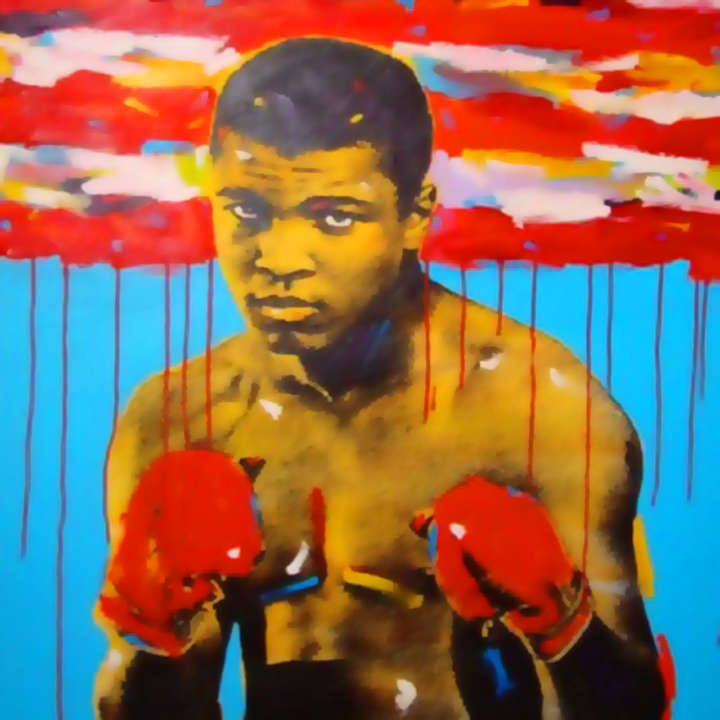 Known as “The Greatest,” Ali helped inspire countless other athletes to rise to the top of their respective sports. From the NFL’s Deion Sanders, the NBA’s Shaquille O’Neal and MLB’s Justin Verlander to cricket’s Sachin Tendulkar and tennis’ Boris Becker, those influenced by Ali spanned the globe.

"Muhammad Ali transcended sports with his outsized personality and dedication to civil rights and social justice. He was an inspirational presence at several major NBA events and was deeply admired by so many throughout the league. While we are deeply saddened by his loss, Muhammad Ali's legacy lives on in every athlete who takes a stand for what he or she believes." – @adamsilvernba

Reppin the GOAT SHIRTS with @realgranthill THIS FOR U CHAMP, THE WORLD WILL NEVER FORGET #muhammadali

Muhammad Ali and I share the same birthday and that alone made me feel I had purpose. Yes, he was a great boxer, the greatest of all but as a courageous humanitarian, that is where his brilliance spoke loudest to me. He made me believe I could become HIM. I could be my own man, use my own voice, stand up for my beliefs AND be respected for what I do on my battle field which is the court. He was strong, proud and vocal… a black man who lead by words and action. Misunderstood and unappreciated for most of his life. Thanks for standing for all but especially your own. It was always my honor to be in his presence and I am a better man for it. #RIPALI

R.I.P to the Greatest thanks for all you done for the WORLD ..Way more then a boxer #Muhammadali #Champ

My thoughts & prayers go out to Muhammad Ali's family. My long statement is posted onhttps://t.co/3E8awvpT08 pic.twitter.com/aEVzMacHg0

"If my mind can conceive it & my heart can believe it—then I can achieve it." Muhammad Ali taught us all to dream. pic.twitter.com/my6Cdw2p12

🙏🏽 4 the Fam! Will never be another! Thank u Champ! Not only 4 ur fights in the ring, but more so out of it!!#Ali pic.twitter.com/6PapMdygyN

Muhammad Ali was the reason I fell in love with boxing. He was a champion, a showman, he was charismatic…

#RIP @muhammadali the Greatest athlete to EVER live! He was 1 of my childhood heroes because of his brashness,articulation,style and CONFIDENCE. There was only 1 athlete that I placed his picture in my weightroom at home. The Picture was of The champ saying "ALL I DID WAS STAND FOR WHAT I BELIEVED". I respected ALI in and out of the ring because he was so much more than a boxer. 1 of the greatest days of my life was when I attended his charity event in Arizona and spent true quality time with the Champ in his suite talking about my faith and his. I stood for what I believed & he did too. Wow it was such a beautiful thing that 2 brothers with different thoughts and convictions but expressing love & respect for one another with Peace & Joy. There will NEVER be another like my HERO MUHAMMAD ALI!!!!!! I'm truly saddened we've lost a REAL MAN that was so much bigger than boxing and was willing to fight the multitudes as well for you and i. #hestood #Hefought #Hesmiled #Hewasreal #Hewastimeless #Truth

"The world has lost a great Champion. Muhammad Ali, lover of human beings, a warrior for the fight against discrimination…a great friend."

Rip Champ you will always be the Goat ❤️😔 pic.twitter.com/kKegCW9Wnf

I met #Ali once. He was a great role model and a great man. Sending my thoughts and prayers to his family tonight.

RIP Muhammad Ali. An inspiration for all! #GOAT 🐐

The world of sports – and the world at large – lost a courageous champion of sports and peace. #RIPMuhammadAli

"The man who has no imagination has no wings" || R.I.P. to the greatest ever

Muhammad Ali, Titan of Boxing and the 20th Century, Dies at 74 https://t.co/TurLrOgxiV

Sad day. This man was iconic changed so many people's lives @MuhammadAli. The legacy will never die. Rest in peace champ

Sad to hear about the passing of Muhammad Ali. Greatest boxer of all time and always fighting to help others.

"He who is not courageous enough to take risks will achieve nothing in life" #Ali #TheGreatest 🙏🏽 pic.twitter.com/bhXiBJATrp

"I hope on a day when we mourn the loss of a champ — the 'greatest of all time' — we can reflect and appreciate his many contributions past and present, and ensure that generations going forward will admire and be inspired by all that Muhammad Ali accomplished." — Jack Nicklaus

You'll always be The Greatest for more than just what you did in the ring. A champion to so many people in so many ways.

It is an understatement to say that today the hearts of the sports world are heavy with the loss of Muhammad Ali.… https://t.co/p3BdM1Pzf3

The true GOAT. What a sad day for everyone to loose someone so great and kind and someone who really stood up for what they believed in. He was my hero. He always will be. #muhammadali #cassiusclay

An inspiration. A legend. Forever a champion. RIP Muhammad Ali. 😢

I know where I'm going and I know the truth, and I don't have to be what you want me to be. Forever a game changer. #RIPMuhammadAli

RIP Champ– you will always "float like a butterfly"!

In Muhammad Ali, an Example of a Truer Kind of Bravery in Sports, – a truer bravery indeed, a Champ in many ways. https://t.co/JugWqQ3ZOw

My hero since childhood. I always had a wish to meet you some day but now it will never happen. RIP "The Greatest” pic.twitter.com/Yj6za7GwUe

Who threw it better?
Inspirational men who fought for many, legends! Let's not disappoint them! #inspire
RIP pic.twitter.com/7vsupvPQSa

The man. The legend, not just for his fighting ability but his general attitude in life. #RIPMuhammadAli pic.twitter.com/Bf2roHktMM

Shocked to hear about Muhammad Ali's death ! One of the greatest sportsman of all time a legendary boxer , may his soul rest in peace

People want to change the world. @MuhammadAli did just that. He transcended boxing and sports. I am forever grateful. #RIPChamp #GOAT

He brought so much skill, charisma and love to sports. RIP Ali 🙏🏻

We lost the "greatest" today… Such an inspiration to many… Me included!!! #ripchamp #wewillmissyou