In 2010, hockey cards celebrated their 100th anniversary, and today — led by Starr Cards — the future of the hobby has never been brighter. We present here a history of hockey cards with the highlights of the past century presented in a pictorial timeline. 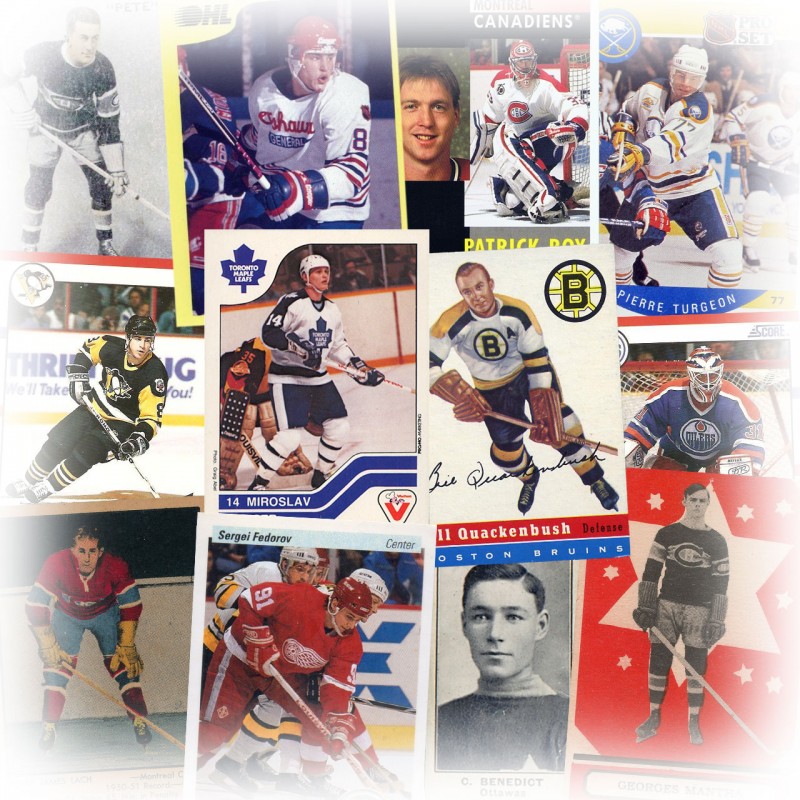 The first new hockey card company of the new millennium is also the first to offer the ability to make your own custom football cards directly on the iPhone, iPod Touch or iPad. Starr Cards Hockey Card Maker has been winning accolades and a fan favorite ever since its debut in the App Store.

First Set of Hockey Cards Released Under the Pinnacle Brand

A year after producing its first hockey cards, Score produced a premium set using the Pinnacle brand. Pinnacle Brands produced its last hockey card set for the 1997-98 season before being sold to the Playoff company, which subsequently became Donruss Playoff. In 2010, Pannini revived the Pinnacle name for its autograph and uniform cards.

In 1985, Optigraphics started producing a unique style of lenticular motion cards under the name Sportflics. It released traditional baseball cards under the Score brand starting in 1988 and followed two years later with its first hockey cards. Score invigorating the industry with better paper quality, action photographs, and improved writing on the backs.

Dad’s Cookies produced a rather curious set of cards for the 1970-1971 season. This series of 144 vertically shaped cards featured stars like Bobby Orr, Tony Esposito, Jacques Plante, and Jean Beliveau, but each player posed for his photo wearing a generic NHL Players uniform rather than his team colors.

Topps first foray into hockey cards came a couple years after producing its first baseball cards. A mint-condition Gordie Howe card from the 1954-55 set can fetch close to $15,000. Topps didn’t produce a hockey set for the 1955-56 season, but resumed production the following year.

Parkhurst produced hockey cards for over a decade minus “The Missing Link” year in 1956. It became established as one of the primary card manufacturers before ceding the market to O-Pee-Chee and Topps in 1964.

The O-Pee-Chee cards had black-and-white photos of players on their fronts, but the images were placed against a colored background (red, blue, orange, or green), in the center of which was a large star surrounded by smaller stars. The backs of these cards were in both English and French.

The 1933 World Wide Gum set was released with two different backs, one with both French and English, and the other with only English. It is assumed that the French-English backs were sold in Quebec and the English-only backs were sold in Ontario.

In the 1920s and ’30s, sports cards migrated from being included with tobacco products to being bundled with candy and gum. A year before issuing hockey cards, Maple Crispette Co. tried a set of baseball cards.

The first hockey cards were issued for the NHL’s inaugural season by Imperial Tobacco of Canada. There were 36 cards in the set, each featuring an illustration of a player on the front and a snippet about him on the back.