Founded more than a century ago in Philadelphia, the Mitchell & Ness company today offers authentic vintage jerseys and apparel collections for the MLB, NFL, NBA, NCAA and MLS. In promotion of their products, they produced a chart of the best basketball players to wear each number from 0 to 99. 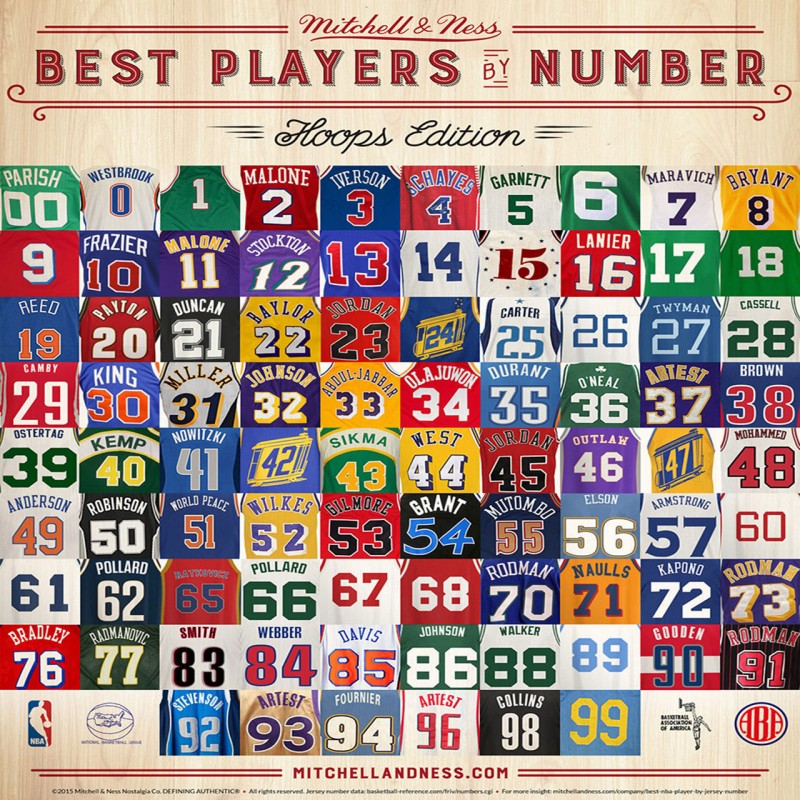 Metta World Peace and Dennis Rodman dominate Mitchell & Ness’ chart of the best NBA players by number. This is primarily by virtue of the two free spirits haven chosen multiple and out-of-the-ordinary jersey numbers throughout their respective careers.

Metta World Peace (aka The Panda’s Friend) appears on the chart four times: #37 for the Los Angeles Lakers, #51 for the New York Knicks, #93 for the Sacramento Kings, and #96 for the Houston Rockets.

The #23, #15 and #91 World Peace (then known as Ron Artest) wore for the Indiana Pacers were blocked, in order, by Michael Jordan, Hal Greer and none other than Dennis Rodman.

Dennis “The Worm” Rodman appears three times on the chart: #70 for the Dallas Mavericks, #73 for the Los Angeles Lakers, and #91 for the Chicago Bulls.

The #10 Rodman wore for the Pistons is blocked on the chart by the New York Knicks’ Walt Frazier.

Noticeably absent from Mitchell & Ness’ jersey wall of fame is LeBron James. His #6 for the Miami Heat is blocked by Boston Celtics legend Bill Russell, and his #23 for the Los Angeles Lakers and Cleveland Cavaliers is blocked by Michael “His Airness” Jordan.