Pete Rose, Barry Bonds and 8 ways for a batter to reach first base safely

Pete Rose, Barry Bonds and 8 ways for a batter to reach first base safely

There are eight unique ways for a batter to safely reach first base in a baseball game. Far and away the most common method is with a hit, and in the sport’s history no one collected more than Pete Rose. 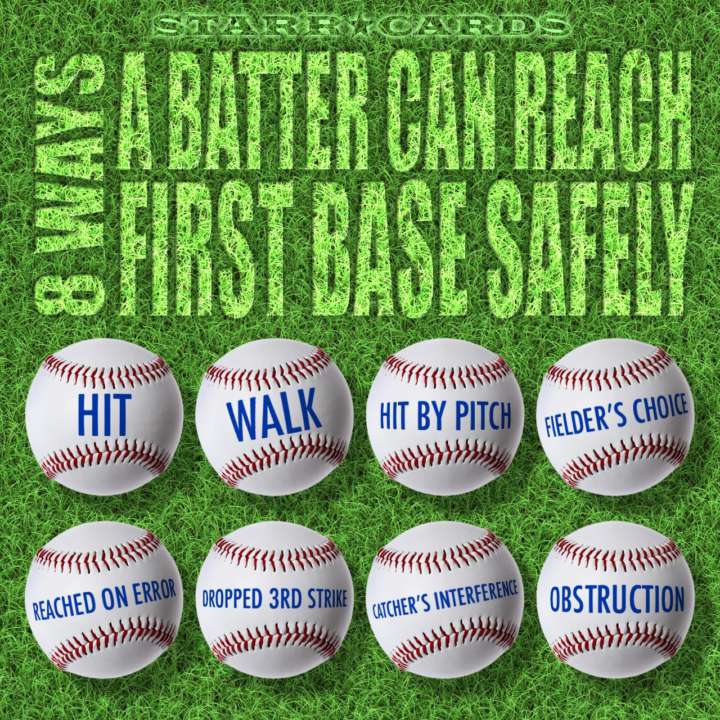 Only four MLB players have been walked more than 2,000 times over the course of their careers — Babe Ruth, Ted Williams, Rickey Henderson and Barry Bonds – but Bonds is far and away the leader with 2,558. This lofty total, together with his being hit by pitches 106 times, also make the legendary San Francisco Giants slugger the all-time leader in reaching first base without a hit.

On May 28, 1998, the Arizona Diamondbacks intentionally walked Bonds with the bases loaded and two outs in the 9th, then got Brent Mayne to line out for the final out. Talk about thinking outside the box!

In the modern era, Craig Biggio took the most physical abuse in the batter’s box. The Houston Astros All-Star second baseman was hit by pitches a side-numbing 285 times.

When Biggio passed Don Baylor’s hit-by-pitch mark of 268 on June 29, 2005, it led to the strange scene of opposing fans applauding his painful trot to first.

The least gratifying method of reaching first is due to fielder’s choice. The batter’s gain is a teammate’s loss.

Detroit Tigers second baseman Ian Kinsler made a clever (and controversial) choice earlier this year to eliminate the Houston Astros’ speedy Colby Rasmus as the baserunner.

No error in MLB history is as infamous as grounder that got between first baseman Bill Buckner’s legs in the 10th inning of Game 6 of the Boston Red Sox 1986 Series with the New York Mets.

As the ball headed out into right field, Mookie Wilson sped to first while Ray Knight scored the winning run from second base.

In 2014, the Blue Jays’ Steve Tolleson, claimed not one base, but two off of a dropped third strike.

Pittsburgh Pirates catcher Tony Sanchez muffed the ball on the third strike from pitcher Francisco Liriano, then made matters worse by throwing the ball over the first baseman’s head.

While catcher’s interference is infrequently called, it nevertheless happens a few times each season.

In 2014, the Texas Rangers’ Elvis Andrus took first base after the umpires ruled that Baltimore Orioles catcher Caleb Joseph interfered with his swing. Adding insult to injury, Shin-Soo Choo got to advance to second on the play.

Obstruction occurs when the runner’s path is blocked by a defensive player.

Oakland Athletics manager Bob Melvin came out to protest in the 9th inning after the California Angels’ Erick Aybar was awarded first base on a play where the umpires rule obstruction.

Obstruction should not be confused with Fielder’s interference, which occurs when a certain full-bodied player impedes with a fan’s snaking on nachos.