Last year, a foursome from the Burnsville Blaze topped the Minnesota State High School All Hockey Hair Team. This year, it took just a single player’s captivating coiffure to nab the coveted honor.

St. Cloud Cathedral forward Reagan Garden came in at No. 1 on the Hair Team with his skull capped by a splendiferous salad ready for primetime shampoo ads. 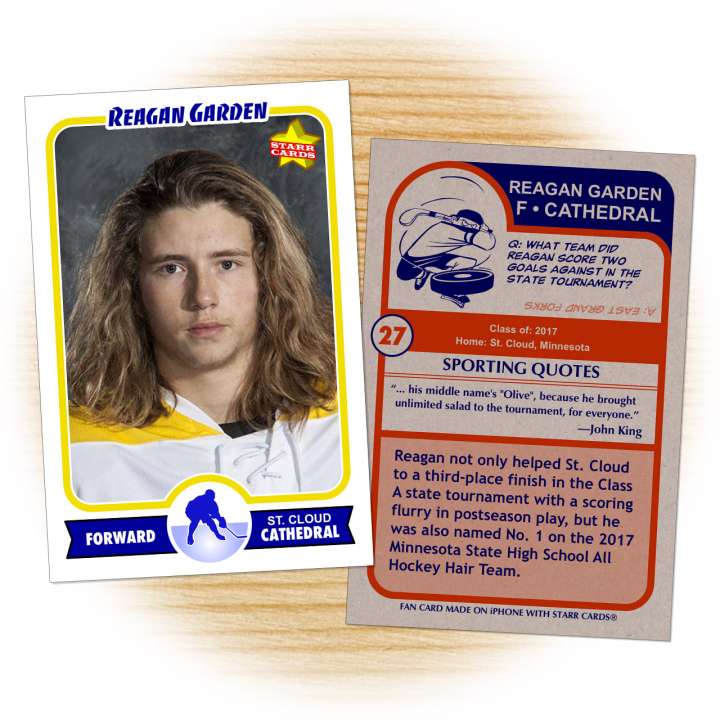 ''In a year of a lot of geometrics and Bruno Mars haircuts, this kid was here to remind us what it is all about and inspire a new generation.''

In ascending order, the other players making John King’s 2017 All Hockey Hair Team include:

Eden Prairie Eagles forward Nick Benson
“They say life is a series of ebbs and flows. Well, Nick from Eden Prairie hasn’t seen an ebb in quite a while.”

Mahtomedi Zephyrs forward Dallas Duckson
“Anyone named Dallas has a good shot to make the team.”

Luverne Cardinals forward Charlie Reisch
“You know what the definition of intense is? Being the only guy on your team to dye your hair.”

Assorted players from the Hendrickson Foundation hockey festival
“CNN spent all that money finding Jesus when he was playing for the Warriors in Blaine the whole time.”

Delano Tigers defenseman Tanner Glasrud
“Tanner’s mullet has party in the back and in the front.”