In 2015, Wichita East student-athlete Michael Kelley made national news when he was compelled by the high school’s principal to remove his varsity letter jacket. Michael, who played for East High’s extra-curricular special needs basketball team, has Down syndrome and autism.

''Another parent, from what I am told, was upset that my son was wearing his letter jacket.''

Michael’s mother, Jolinda Kelley, made the jacket in recognition of the hard work her adoptive son puts into the sport, but another parent complained when Michael wore it to school. In forbidding Michael from wearing the jacket, Principal Ken Thiessen cited school policy which allows only varsity athletes to wear the East High varsity letter.

WE’RE NOT IN KANSAS ANYMORE

When San Antonio Scorpions owner Gordon Hartman caught wind of the drama unfolding in Wichita, he ‘thought it was ridiculous.’ He didn’t hesitate in inviting the Kelley family to fly down (on his dime) to the team’s home opener and they accepted.

The Scorpions signed Michael to an honorary contract and allowed him to sit on the bench in a No. 33 uniform — the same number he wears on his basketball team. His family also got to take in Morgan’s Wonderland, a San Antonio-area amusement park with accessibility for special needs guests. 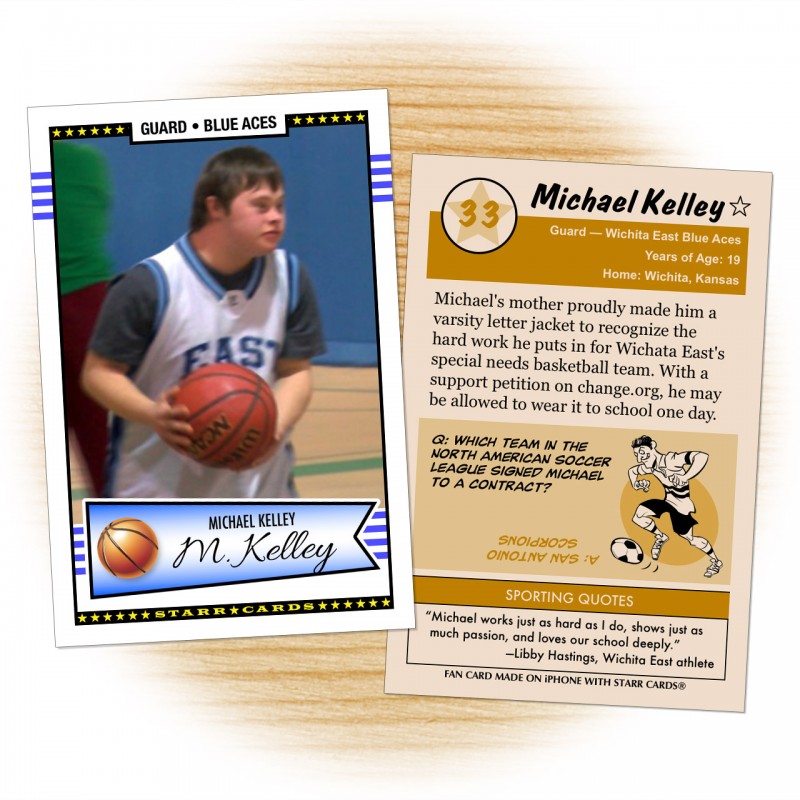 Another Wichita high school student — using the alias FaithInWichita on Imgur — made a basketball card in recognition of Michael’s play and to support Hastings petition.

CHANGE IS IN THE AIR

Meanwhile, back in Wichita, a classmate of Michael’s started a petition on change.org. Frustrated by her school’s rigid stance regarding the wearing of the varsity jacket, Libby Hastings asked the school district to ‘allow special needs students the opportunity to earn a varsity letter if they participate on a school-sponsored team.’