Stephen Curry, Warriors improve record to 67-7 on quest for 73 wins

Stephen Curry, Warriors improve record to 67-7 on quest for 73 wins

With their 102-94 victory over the Washington Wizards on Tuesday night, the Warriors became the fastest team in NBA history to reach 67 wins. They also became the first franchise to record 54 home wins in a row, besting the record set by the ’96 Bulls by ten games.

Stephen Curry led the way for the Warriors with 26 points (including the emphatic dunk pictured above), 7 assists, 7 rebounds, and 5 steals.

As impressive as the Warriors win total is, the Splash Brothers’ (Curry and Klay Thompson) offensive contribution to the team — particularly in the realm of three pointers — is even more unprecedented.

Curry broke the previous record of 286 3-pointers, which he set last year, with 24 games remaining. With six more treys against the Wizards, Curry brought the season total to 356. With 8 games remaining, he will have to average 5.5 3s per game to breach 400.

''As you go through the season and kind of get lost in the journey, we should be able to accomplish both: be a better team and better our record, which we're on our way to doing.''

Thompson has 255 3-pointers for the season, and hopes to become the second player (after Curry) in NBA history to surpass 300. Together, the Splash Brothers have drained an NBA record 611 three-pointers on their opponents this season.

The Warriors will have to finish the season 6-2 or better in order to break Chicago’s 72 win total. The good news is five of the games are at Oracle Arena where the Dubs are undefeated thus far. The bad news is they still have two games left with the Spurs, including one in San Antonio. 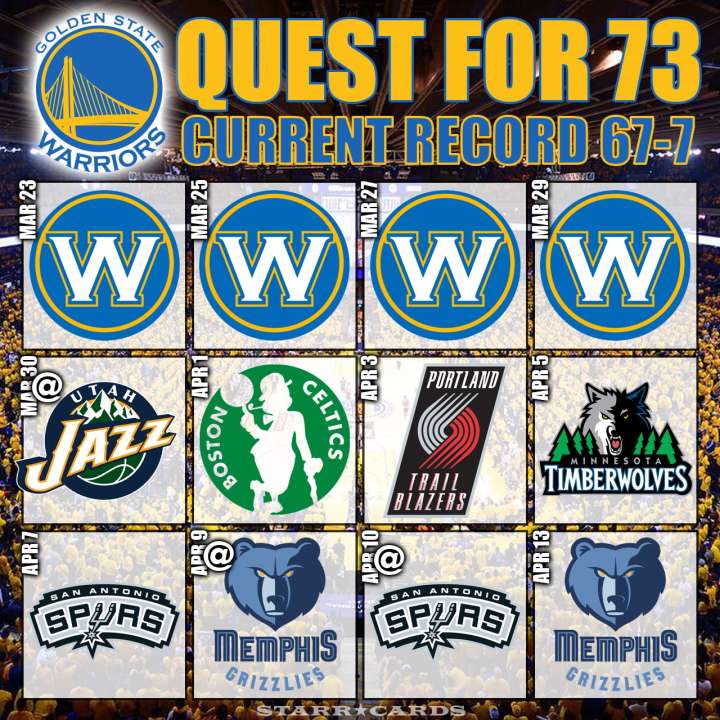