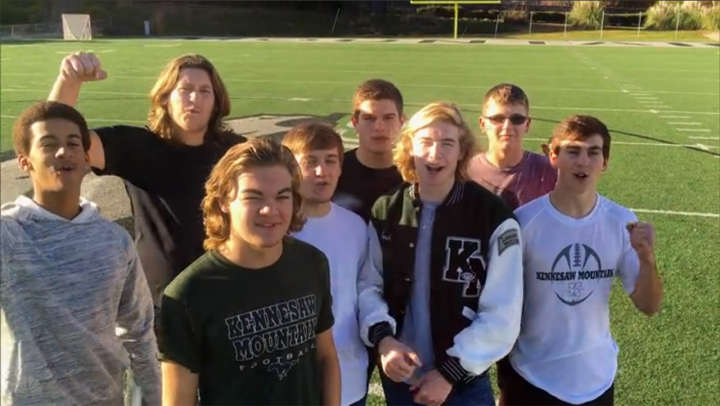 Supported by former teammates from the Kennesaw Mountain Mustangs football team, Zach Seabaugh advanced to the next round on The Voice after a hip-shaking Tuesday night performance of Queen’s “Crazy Little Thing Called Love.”

Seabaugh’s current teammates on Team Blake joined him in the final nine. Country singers Barrett Baber and Emily Ann Roberts both charted in the iTunes Top Ten, with “I’d Love to Lay You Down” and “She’s Got You” respectively, to advance in the competition.

Seabaugh is the last athlete standing on The Voice this season, as former baseball standout Blaine Mitchell and basketball player Lyndsey Elm were eliminated in earlier rounds.

Mitchell was not terribly distraught over his elimination on The Voice, as concurrent with his exit he managed to secure a disc-golf partner for life in marrying girlfriend Haylee.

''I've gained a lot of loyal fans that love who I am and the art I love to present to an audience. This is just another step in my journey!''

— Blaine Mitchell, on his elimination

For her part, Elm too has made the most of her time since leaving The Voice. On November 4, she sang the national anthem at Oracle Arena prior to the Warriors game with the Clippers. Back then Golden State sported a meager 4-0 record. Since Elm sang, they’ve tacked on another fifteen consecutive wins. Coincidence, or is it the Elm effect?

last night was a dream. big thanks to the @warriors for letting me check something off my bucket list and making it such a great game to be at in person! #dubnation #teamlyndsey (📷: @juliephayer)