New sports occasionally appear that represent the mashup of previously existing sports (e.g. footgolf), but few have the manifold pedigree of China’s taiji bailong ball (also known as taiji rouliqiu and roliball). Created by a volleyball player turned boxing coach, TBB is a sport played with badminton-like rackets that incorporates the flowing movements of tai chi.

The ball used in TBB was inspired by an “airbag glove” that the sport’s inventor, Professor Bai Rong, developed to soften the impact of punches during boxing training. This glove was filled with the bladder of a volleyball, which itself was filled with water and air.

''The forces that act upon the racket and the ball should, as far as possible, be generated by the whole body in a holistic movement.''

After training sessions, boxers would toss the gloves about and were intrigued by their unusual, but predictable, movements. Cooking woks from the gym’s kitchen were employed as de facto rackets, and TBB’s earliest incarnation took shape. 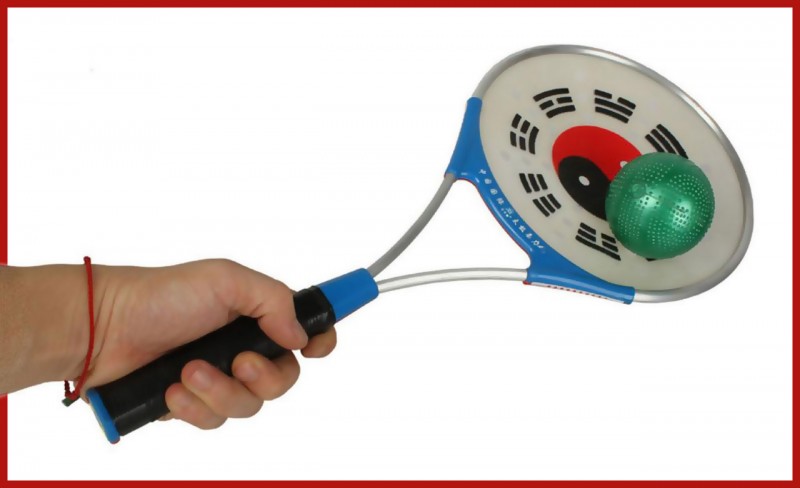 The racket, which is similar in size and shape to those used in badminton, is made of light-weight aluminum for durability and strength. Instead of having strings stretched across the head, there is a taut membrane inscribed with a pattern of small holes that radiate from the center. 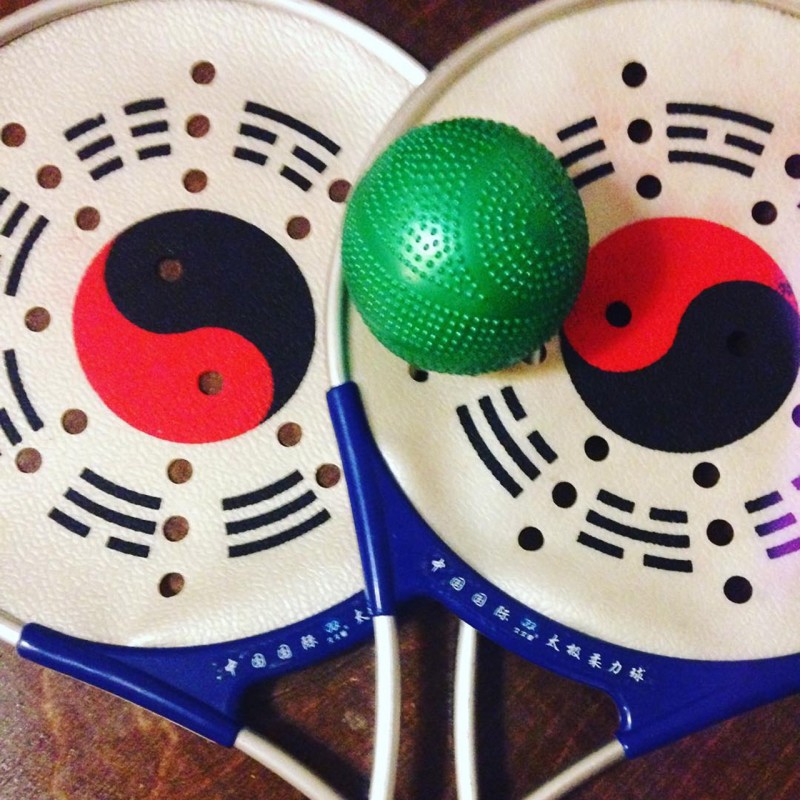 The flexible rubber-skinned ball weighs only 53 grams, or about a third of what a baseball weighs.

In soloplay the player “dances” with the racket and the ball. The aim is to give the ball just the right amount of momentum so that, thanks to centrifugal and centripetal forces, it appears to defy gravity and stick to the racket.

In multiplay the players – or partners – play the ball back and forth in accordance with TBB philosophy. Hitting the ball is not allowed. The swinging movement, from the moment the ball is received to the moment it is released, should be a single movement.

The philosophy behind TBB, which draws from the traditions of tai chi, separates it from other racket sports like badminton, tennis and squash.

Soloplay requires full concentration on your movements and environment, thus dispelling wayward thoughts. To avoid dropping the ball you are compelled to concentrate on the here and now. The ball and the racket serve as mediators through which you sense your own body and your own movements. As a result, your faculty for spatial perception is honed.

The conscious suppression of the urge to hit, coupled with the unconscious yielding motion in every swing during multiplay, gradually trains you to adopt a dialectical way of thinking when attempting to overcome problems and conflicts. A physical attitude characterized by aggression, apathy and stubbornness is replaced by one of composure, motivation and openness.

TBB AROUND THE WORLD

Getting schooled at "Taiji Bailong Ball" by the ladies in the park. A rhythmic, harmonious form of Tai Chi/Kungfu I am told.

To date, the spread of taiji bailong ball has been primarily in its country of origin, and within Western Europe, particularly Germany and the Netherlands. In the United States, one is most likely to encounter the game being played in parks by Chinese expat seniors who value it for its benefits to muscle tone and circulation.