With their 100-99 victory over the Memphis Grizzlies on Saturday night, the Warriors became just the second team in NBA history to reach 71 wins. They’re now tied the ’96 Bulls for the most road wins in a season at 33. Last week, the Dubs’ record steak of 54 home wins in a row was ended by a scrappy Boston Celtics squad.

Dubs now 33-7 on the road this season, tying the 1995-96 @chicagobulls record for the most road victories in a season.

Against Memphis, Draymond Green led the way for the Warriors with 23 points and 11 rebounds.

Curry broke the previous record of 286 3-pointers, which he set last year, with 24 games remaining. With three more treys against the Grizzlies, Curry brought his season total to 388. With two games remaining, he will have to average six 3s per game to reach the once unthinkable total of 400. Curry also extended his record streak of regular-season games with a made 3 to 150, with no end in sight.

''Two teams in the history of this game have reached where we are right now. It's a proud moment and something that should be recognized.''

Thompson has 270 3-pointers for the season; together the Splash Brothers have dropped an NBA record 658 three-pointers on their opponents this season.

Three games ago, against the Portland Trailblazers, the Warriors became the first team to exceed 1,000 3-pointers in a season and now have 1,047 for the year (the 2014-15 Houston Rockets owned the previous record with 933).

The Warriors need to finish the season with a couple of victories in order to break Chicago’s 72 win total. Next up, they visit San Antonio where the Spurs are undefeated, before finishing with the Grizzlies at home. 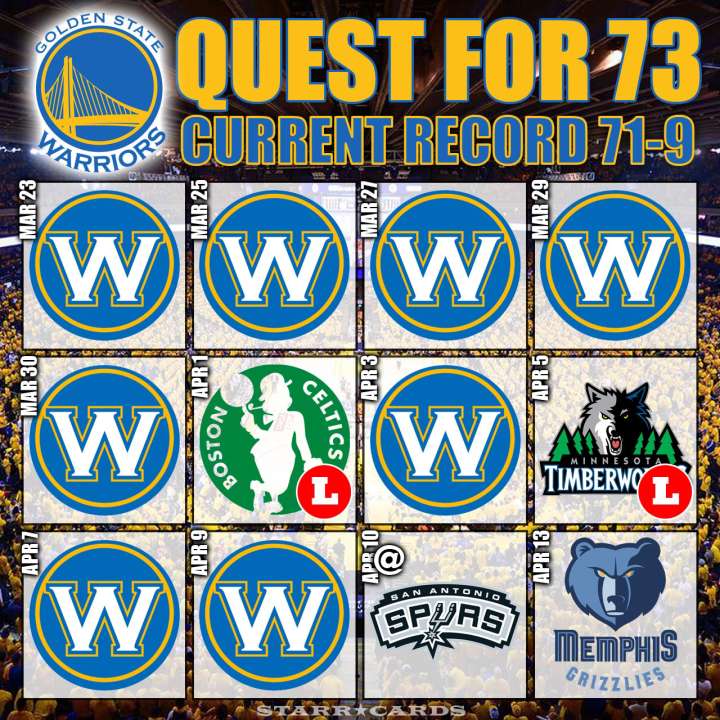 While the Warriors should be near full strength to finish up the season barring any new injuries, the oddsmakers still don’t like the Warriors chances (32%) to reach 73.

Not surprisingly, opinions are divided as to how the Warriors should approach the final two games. To rest or to run, that is the question being bandied about by head coach Steve Kerr and the players. One thing is certain; team leader Green is all in.