Warriors set NBA record for most road wins in a season, tie ’96 Bulls for most wins

Warriors set NBA record for most road wins in a season, tie ’96 Bulls for most wins

The 2015-16 Golden State Warriors continue to rack up NBA records in their pursuit of the grandest of them all — 73 wins in a season. They started the season by winning their first 24 games, which set a new standard of excellence among major professional sports in America. The Warriors home winning streak didn’t end until April Fool’s Day, after they had reeled off 54 in a row.

With their 92-86 victory over the San Antonio Spurs on Sunday night, the Warriors set the all-time record for road wins with 34 in a season, and tied the 1995-96 Chicago Bulls for most wins at 72. With just one game remaining, they also are assured of becoming the first team in NBA history not to lose back-to-back games.

Against the Spurs, Stephen Curry was his usual MVP-self and led the Warriors with 37 points, 5 assists and 5 rebounds.

Curry broke the previous record of 286 3-pointers, which he set last year, with 24 games remaining. With four more treys against the Spurs, Curry brought his season total to 392. With just one game remaining, he will have to connect on eight 3s to reach the once unthinkable total of 400. Curry also extended his record streak of regular-season games with a made 3 to 151, with no end in sight.

''We put ourselves in a great position to end the season with a win and do something no team has done in the history. That's an amazing accomplishment.''

Thompson has 272 3-pointers for the season; together the Splash Brothers have dropped an NBA record 664 three-pointers on their opponents this season.

Four games ago, against the Portland Trailblazers, the Warriors became the first team to exceed 1,000 3-pointers in a season and now have 1,057 for the year (the 2014-15 Houston Rockets owned the previous record with 933).

The Warriors need to finish the season with a win at home against the Memphis Grizzlies to break Chicago’s 72 win total. Working in their favor is their record at Oracle Arena this season is 38-2, although both losses came in April. 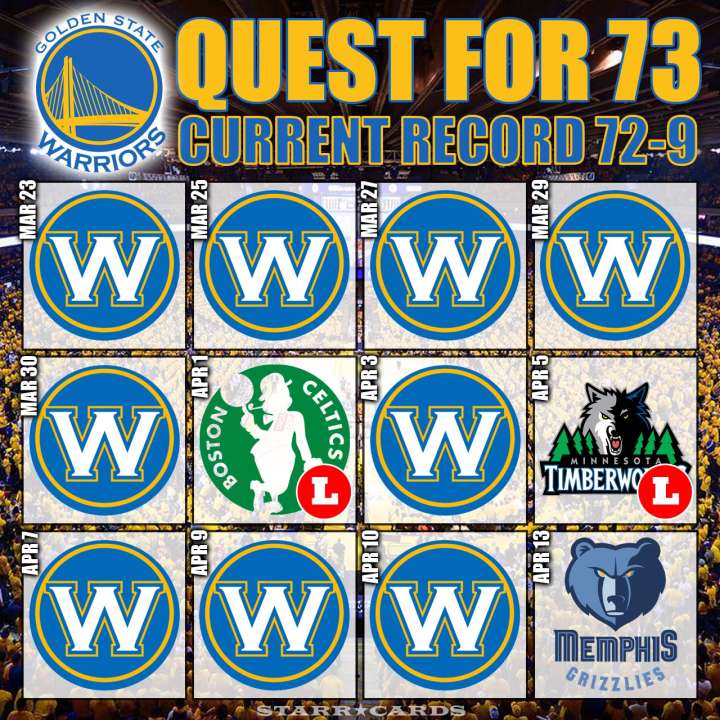 The Warriors will be near full strength to wrap up the season, and the oddsmakers now have their chances at 93% to reach 73 wins.