The NFL is enjoying an era of quarterbacking prowess the likes of which has never before been seen. The top two quarterbacks in career passer ratings (minimum 2,000 passing attempts) — Aaron Rodgers and Russell Wilson are still active and continuing to set new marks.

Since 1973, passer rating has been the official formula used by the NFL to determine its passing leader. The stat is generated from a formula applied to a player’s passing attempts, completions, yards, touchdowns, and interceptions. The resultant number ranges from 0 to 158.3 — the latter being considered a “perfect” game from a passing perspective. 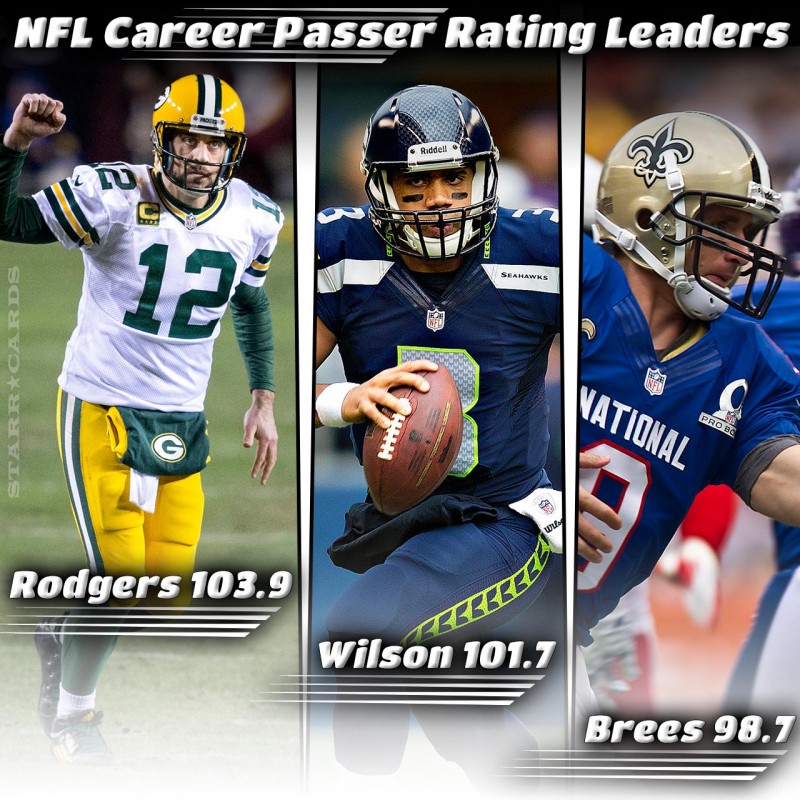 Rodgers career passer rating of 103.9 makes him the lone quarterback in league history to consistently have a number north of 100. His 2011 rating of 122.5 still holds as the benchmark for a season’s work. In 2009, Rodgers recorded his best single game rating of 155.4, which came in a 31-3 victory over the Cleveland Browns. In that game he racked up 246 yards and 3 touchdowns while completing 75 percent of his passes.

Wilson’s career passer rating (101.7) edged back over 100 on the strength of the past three season’s numbers, the first of which produced his highest single-season rating to date (110.9). In 2018, Wilson posted a perfect single game rating of 158.3 in a 28-14 victory over the Detroit Lions. Playing on the road at Ford Field, he tallied 248 yards and three touchdowns while completing 82.35 percent of his passes.

Brees has edged ahead of Brady in career passer rating on the strength of a historic 2018 season in which he posted a single-season mark of 115.7. In 2009, the six-foot-oh play caller from Texas recorded a perfect game 158.3 in a 38-17 win over the New England Patriots, throwing for 371 yards and 5 touchdowns on 18-23 passing.

Incredibly, six of the top ten leaders in career passer rating are active players. For a player to appear in the rankings they need a career minimum of 2,000 pass attempts. Watch for Kansas City Chiefs thrower Patrick Mahomes (109.4) to become a mainstay in the top-ten in upcoming years.