In the hours before the 2020 NBA Dunk Contest, we thought we would take a look back at Guy Dupuy’s high-flying feats the 2017 Finals of the Dunk King on TNT. Not only did he win the competition, but he also won a hand in marriage.

Dupuy dedicated the first of his two slam dunks to long-time girlfriend Dania Bernard — while simultaneously employing her as a prop next to the Ford Mustang convertible he was about to leap. After he successfully completed the jam, Dupuy circled back around the car to fall down on one knee in front of Bernard and propose. 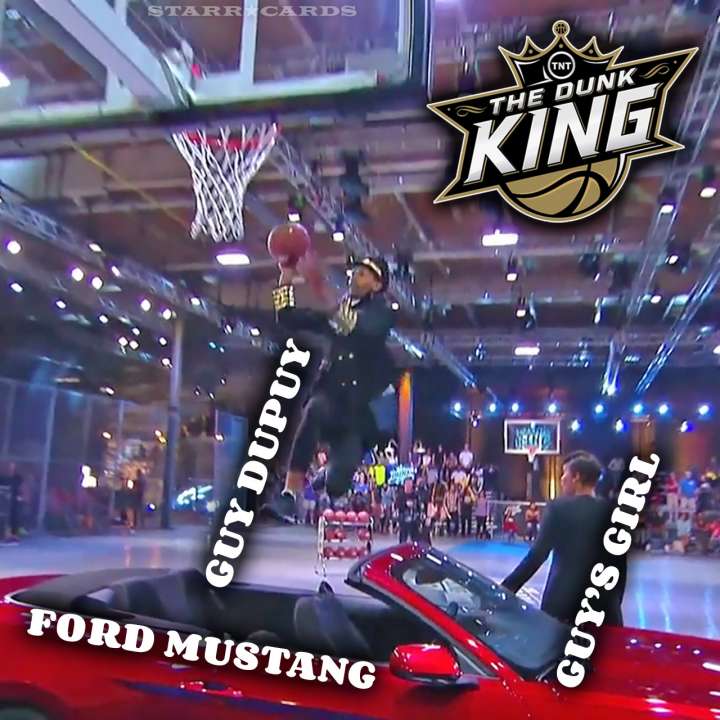 Bernard’s acceptance left color man Kenny Smith in tears as well as judge Shaquille O’Neal. Dupuy earned a 97.3 for his efforts and secured a spot in the competition’s top four.

For his first dunk, legendary high-flyer Jordan Kilganon, donned in a leprechaun suit, jumped four guys in an array of rainbow-colored sweatshirts, before dabbing a gold-colored ball through the hoop. Former NBA dunk champion Brent Barry mused that Kilganon’s dunk may have been the best he’s ever seen and awarded him a perfect score, as did O-Neal and third judge Charles Barkley.

Dupuy again jumped over the Mustang for his final dunk, but this time he took the ball from a friend on the way up, threaded it between his legs, then windmilled it through the hoop.

For Kilganon’s second dunk, he went for broke with a revolutionary approach in which he tried to send the ball through the basket with his hands behind his back and over his head. Confused? Just watch the video and marvel at his seemingly unlimited hops.

With his mother and brother looking on, Kilganon was unable to satisfactorily complete the dunk in three attempts, leaving Dupuy as the last man standing and 2017 Dunk King.