Hear me now, believe me later. After a lengthy sabbatical, Hans and Franz returned to pump up Packers quarterback Aaron Rodgers during the offseason and it remains to be seen if it’s enough to help him weather his bout with COVID-19.

Behind the Austrian duo’s bloated muscle suits, are Kevin Nealon and Dana Carvey reprising the roles they made popular on Saturday Night Live. 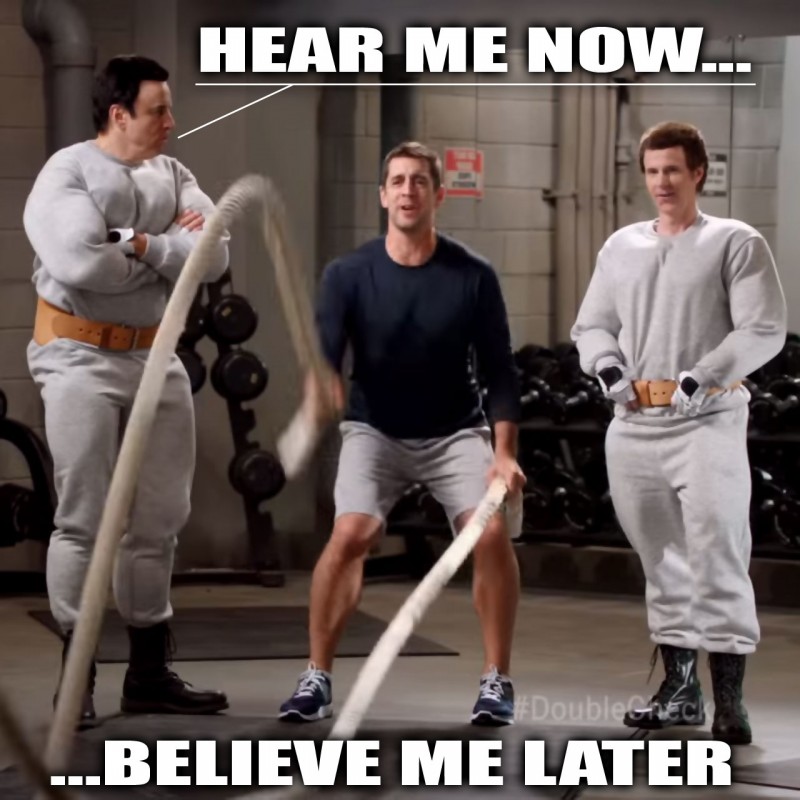 Aside from pulling a military tank, and having Rodgers pull their water skis with a kayak, Hans and Franz have the star QB pump up his arms by working out on battle ropes comprised of an Austrian woman’s lengthy blond braids.

The idea for the original Hans and Franz SNL sketch was spawned in 1987 in a Des Moines hotel room. Nealon was watching an interview with Arnold Schwarzenegger on Showtime and invited Carvey, with whom he was on a comedy tour, over to watch. The sketch made its debut in the first episode of Season 13.

Schwarzenegger took the SNL parody in good stride and made several appearances with Hans and Franz, including a season 17 visit to open episode 7. The transcript from that sketch follows:

Hans: Oh, I don’t believe this!

Franz: We are not properly pumped up!

[ Hans & Franz desperately start flexing and working out their muscles ]

[ Arnold Schwarzenegger enters the set, his pecs bouncing in rhythm ]

Arnold: Hello, hello. I am back!

Hans: Oh, Arnold, I can’t believe how properly pumped up you really are!

Franz: Ya! You are the embodiment of perfect pumpitude!

Franz: Ya! Lok at this! [ flexes more vigorously ]

Arnold: Oh, you guys make me sick. [ mimes vomiting ] This is what you have to do. Like this [ demonstrates the proper way to flex his muscles ] That’s the way to do it! Look at you guys, how pitiful losers you are! You know something? I hate the way you guys talk! What’s the matter with you? I mean, I sent you over here from Austria, to become real hard-core terminators, and look what you are – little termites! I wanted you to become real running men; but you are girly-men. Oh, come on, you make me sick! And look at those legs, they look like little skinny sticks! And those buttocks. Soft, like marshmallow. You huys are lucky you don’t have a campfire here in the background. And believe me- [ sees sullen faces ] What’s the matter?

Franz: It’s no use, Arnold. Compared to you.. we are losers. And not even the grown-up kind, the little baby losers.

Hans: Ya. You know, you could very easily flick us with your ltitlest finger, and send us flying across the room until we landed in our own baby poop.

Arnold: I know. I know, you’re right. But don’t be downing yourself too much now. Listen to me now, and beleive me later: it doesn’t matter how much you pump up those muscles, as long as you reach the full pumptential.

Hans: Ya, I think I understand, Arnold. ‘Sank you.