The origins of boxing cards predate the turn of the last century. Today, led by Starr Cards, and with interest rekindled by the Mayweather-Pacquiao fight, the future of commemorating the sport’s best boxers with trading cards has never been brighter.

We offer here a look back at the history of boxing cards with highlights from the past one hundred twenty-five years presented in a pictorial timeline. 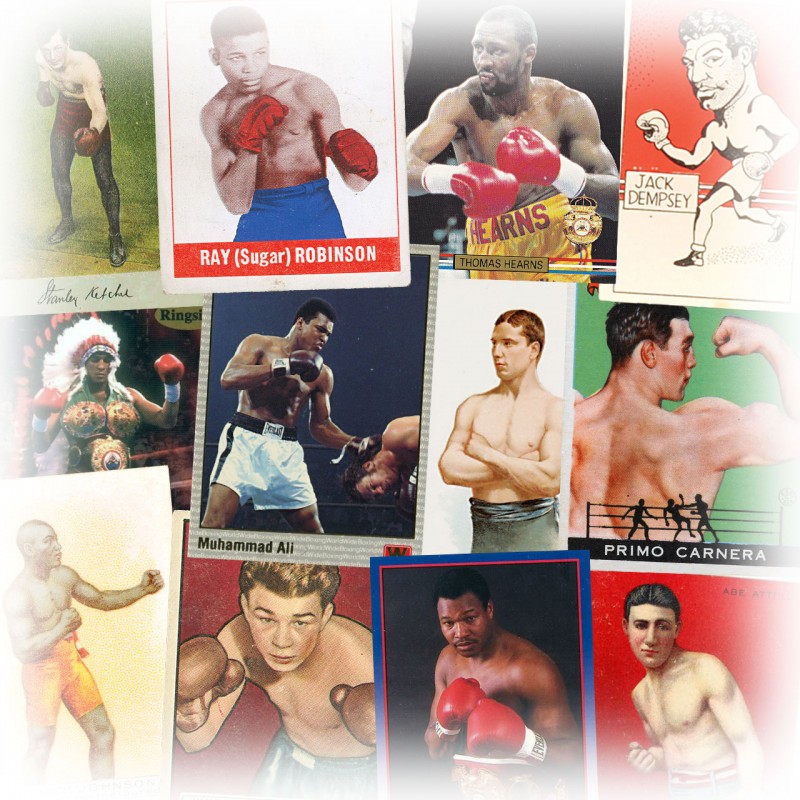 The first new boxing card company of the new millennium is also the first to offer the ability to make your own custom boxing cards directly on the iPhone or iPad. Starr Cards Boxing Card Maker debuted in the App Store’s Top Ten for Sports and has been a favorite of boxing card aficionados ever since.

Ringside was the first boxing card set to be offered after the brief spate of production in 1991. The name would return in 2010 attached to memorabilia and signature cards.

AW Sports, Inc. was just one of three new trading card companies to focus on boxing cards in 1991, each hoping to capture some of the surge in interest surrounding the card collecting hobby.

The Kayo boxing card set contained 250 cards, including a prized Muhammad Ali hologram card. The first card in the set was of popular sports artist LeRoy Nieman whose work includes the artwork for posters promoting the Ali vs Homles, Hearns vs Hagler and Tyson vs Berbick fights.

The 40-boxer Ringlords set won a rave review from Tuff Stuff magazine upon its launch in November of 1991. At the time, the card maker’s coup was to sign Evander “The Real Deal” Holyfield to an exclusive deal to appear on Player International’s cards.

The Topps “Ringside” set contained 96 cards of both boxers and wrestlers, including one of today’s most sought after cards — #49 Bob Murphy. Other valuable cards in this set are Rocky Marciano, Joe Louis and Ray Robinson.

In 1948 and 1949, the Leaf Candy Company produced crude, boldly-colored sets of baseball, football, and boxing stars. These sets have the distinction of being the first post-war cards in color. The Leaf “Knockout” set contains 49 cards that were cut from sheets of 7 x 7 cards.

The W.A. & A.C. Churchman company was a branch of Imperial Tobacco Co. They first produced boxing cards that were included with their 1931 “Sporting Celebrities” release, but the 1938 offering was their first dedicated boxing card set. The backs of the cards featured detailed boxer bios.

In 1933, Goudey produced a 48-card set, known as “Sport Kings”. In all, 18 sports are showcased in the set and many of the athletes are legends in their respective fields. Among the boxers included are Jack Dempsey and Gene Tunney.

The 1910 T225 Prizefighters set is a rare 50 card set that was produced by the Subrug Company of New York City to sell with their Intermission Little Cigars and Arab Turkish Cigarette brands.

Allen & Ginter was a Richmond, Virginia, tobacco manufacturing firm formed by John Allen and Lewis Ginter in 1875. In 1887, the company created the first cigarette cards for collecting and trading. Some of the cards in the series include Jim Corbett, Jack Dempsey, Harry Greb, and Louis “Kid” Kaplan.