Football cards celebrated their centennial anniversary in 1988 and today, led by Starr Cards, the hobby’s future has never been brighter. We offer here a pictorial history of football cards organized in a timeline spanning the decades. 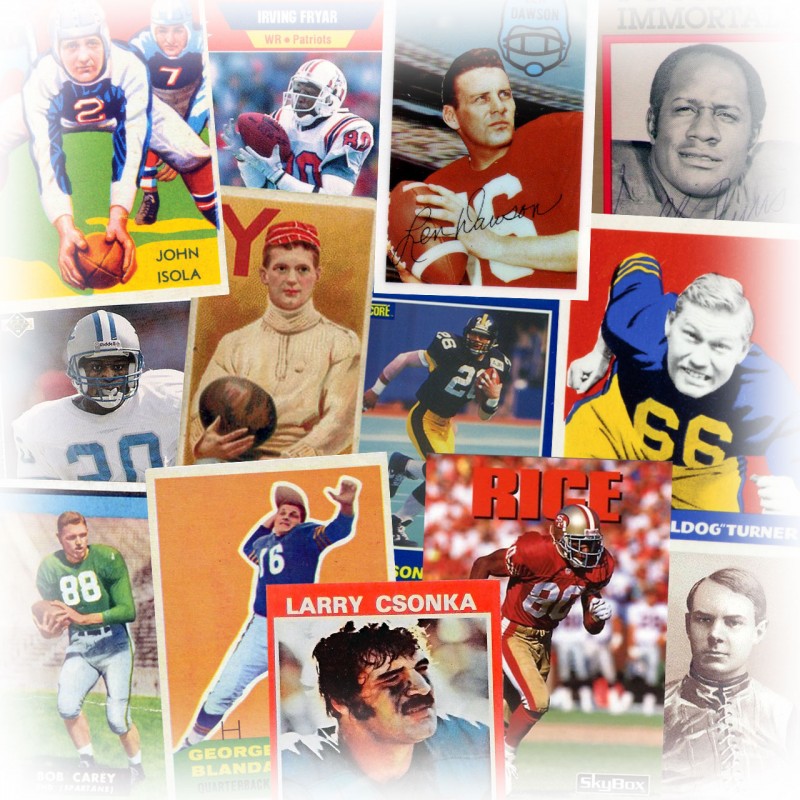 The first new football card company of the new millennium is also the first to offer the ability to make your own custom football cards directly on the iPhone, iPod Touch or iPad. Starr Cards Football Card Maker has been winning accolades and a fan favorite ever since its debut in the App Store.

First Set of Football Cards Released Under the Score Brand

In 1985, Optigraphics started producing a unique style of lenticular motion cards under the name Sportflics. It released traditional baseball cards under the Score brand starting in 1988 and followed a year later with its first football cards. Score invigorating the industry with better paper quality, action photographs, and improved writing on the backs.

TCMA (The Card Memorabilia Associates or Tom Collier and Mike Aronstein) created their first football cards in 1981 patterned after their earlier SSPC baseball card design. According to Aronstein, “I used the 1953 Bowman set as a model. I had always liked the simplicity of that set… Nothing fancy. Just a card.” That concept spawned what collectors often use to describe TCMA’s offerings: The “Pure Card.”

In 1970, the football card world gained a new entry into the market — The Kellogg Company. Kellogg’s released a set of cards that featured the best football players of the era. Included in boxes of Corn Flakes, the cards were made to appear three dimensional, a relatively novel concept at the time. Kellogg’s intermittently released new 3D sets up until 1983.

Post’s football cards were available on thick card stock that could be ordered from the company and were also available singly from cereal boxes. Team sheets were printed on thinner chipboard directly from the Post Cereals Company.

Well established as a gum and candy company, Fleer predated many of its competitors into the business of issuing sports cards with its 1923 release of cards in its “Bobs and Fruit Hearts” candy product. Years later, Fleer launched a card set solely comprised of players in the American Football League.

In addition to baseball, Topps also produced cards for American football in 1951, which are known as the Magic set. Topps did not try football cards again until 1955, when it released an All-American set with a mix of active players and retired stars.

In 1948 and 1949, the Leaf Candy Company produced crude, boldly-colored sets of football, baseball, and boxing stars. Their 1948 football set has the distinction of being the first post-war cards in color.

The 1948 Bowman football cards were originally printed on three large sheets of 36 cards each (108 total cards). The third sheet was printed in much smaller numbers, making cards numbered #3, 6, 9, etc. much more difficult to collect than the others.

Originally intended to be 240 cards, the National Chicle Company football set ended up including only 36 cards — all of which are relatively rare today. The set was the first set to feature players from the National Football League, including six Hall of Fame players. The ultra-rare Bronko Nagurski card, is football’s equivalent to baseball’s T206 Honus Wagner card.

The Mayo’s Cut Plug set consisted of 35 cards cards of top Ivy League players from “The Big Three” of football schools: Harvard, Yale and Princeton. The cards featured black and white portraits of the players wearing turtleneck sweaters and hooded sweat shirts sporting the names of their teams in large letters.

In 1888, several years after American football began its rise as a staple college sport, a cigarette card of Yale’s Henry Beecher appeared, courtesy of Goodwin & Co. The Beecher card was part of the 1888 Goodwin Champions collection, a series of 50 tobacco cards. The cards were nationally distributed in packages of Old Judge & Gypsy Queen cigarettes.