Legend of College Station: Texas A&M Aggies get dressed up in new uniforms for Halloween

Legend of College Station: Texas A&M Aggies get dressed up in new uniforms for Halloween

The Oregon Ducks in collaboration with Nike, have long set the standard for creative uniform design, but they’re being challenged the Adidas-sponsored Texas A&M Aggies. The first fruit of the Adidas-Aggie pairing, revealed three years ago, was still a pretty traditional look, albeit with hi-tech materials.

Ever since, Adidas has been playing with increasingly creative designs — and they’ve saved their best yet for the year’s Halloween game.

The Aggie Nights Primeknit alternate football uniform will be worn by Texas A&M exclusively on Halloween, Saturday, October 31st, for their game versus South Carolina at Kyle Field. Unfortunately, the game is scheduled in the morning, and their reflective helmets would have looked best at night.

A close up look at the Replica Jersey and and Authentic Helmet for Aggie Nights (10/31) #gigem pic.twitter.com/fKrrtUhpLQ

Centered around an all-black theme for Halloween, the Aggie Nights Primeknit alternate uniform features Texas A&M’s “Lone Star Logo” clear-coated seamlessly into the black satin finish of a HydroSkin® helmet from Hydro Graphics Inc. (HGI). This innovative helmet features all-new reflective technology to light up the night. The black jersey and pants are highlighted with silver metallic numbers and stripes with carbon-fiber detailing, while the “Texas A&M” moniker is featured in metallic maroon lettering with carbon-fiber detailing across the chest. Additionally, the Lone Star Logo is also incorporated into the pant stripes, creating a cohesive signature look. 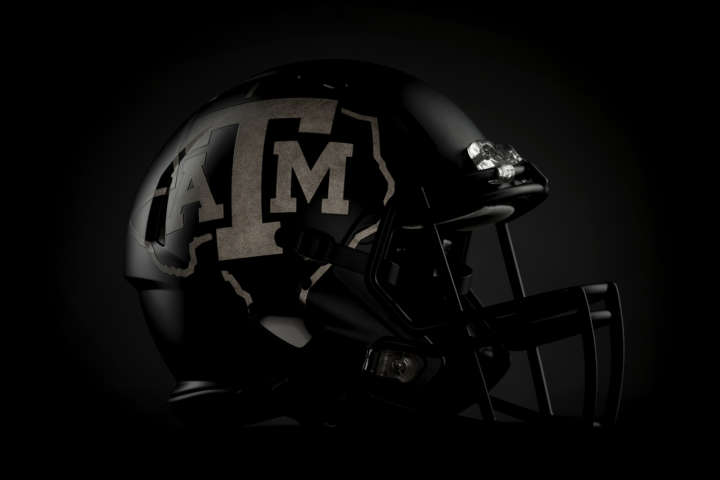 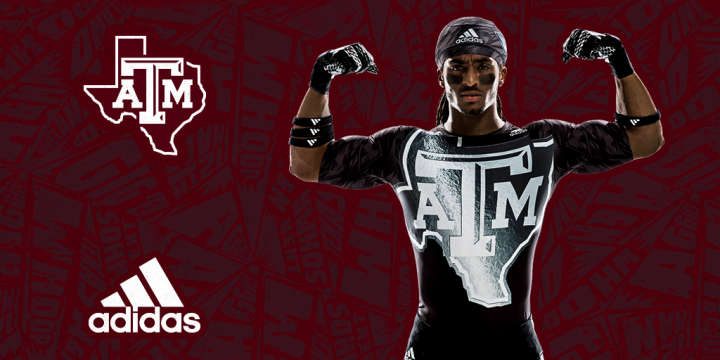 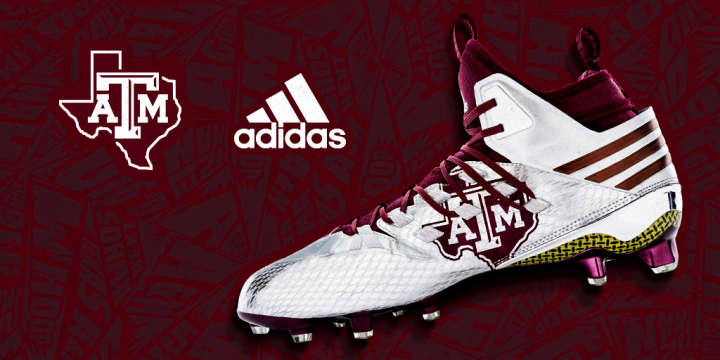 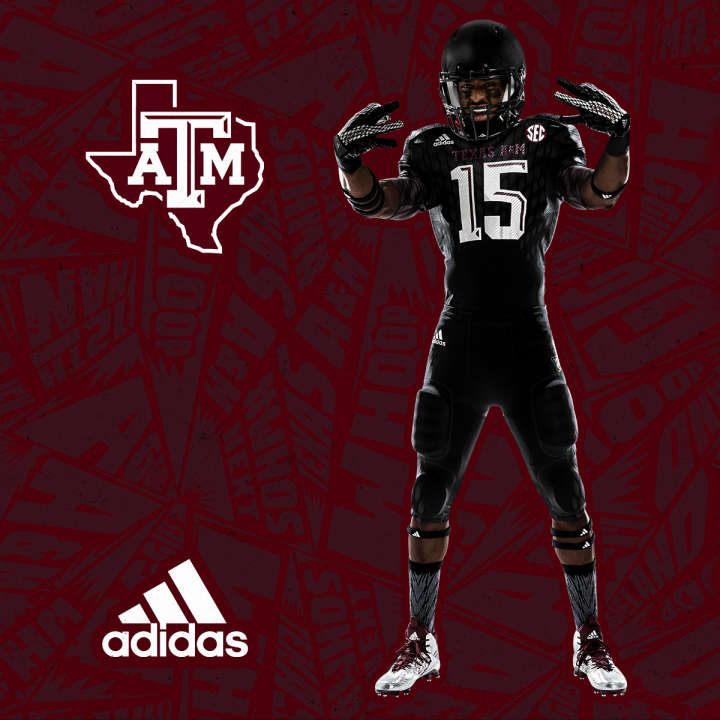 For their home game against the University of Louisiana-Monroe on November 1, 2014, the Aggies went decidedly old school.

The vintage-style uniform, helmet and cleats pay homage to the Aggies’ look during the 1939 National Championship season. Texas A&M’s helmet, produced in concert with Hydro Graphics Inc. and Riddell, is dark maroon with a hydro film leather-like texture featuring wing and cross graphics created using high-resolution photographs of an actual helmet worn by the 1939 team. The helmet also features simulated stitching, wear-and-tear and raised ear protection painted by hand via HGI artists on each shell to further enhance the appearance of a vintage helmet. 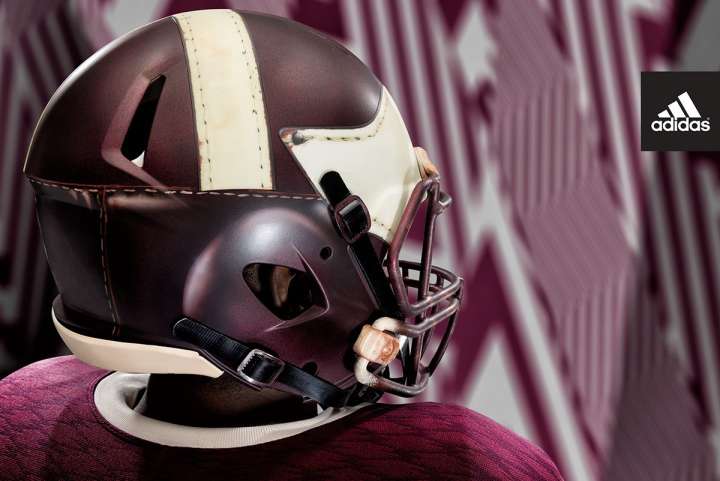 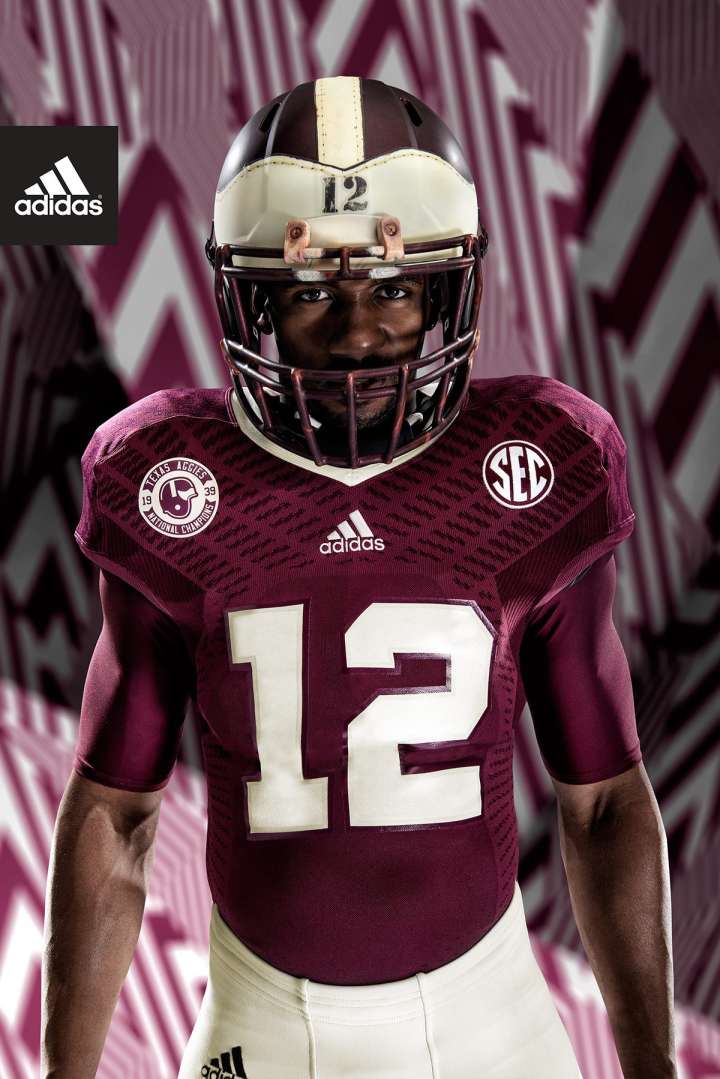 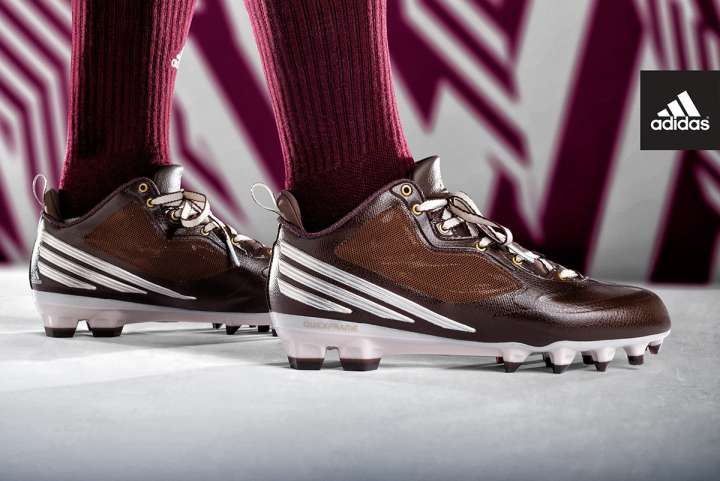 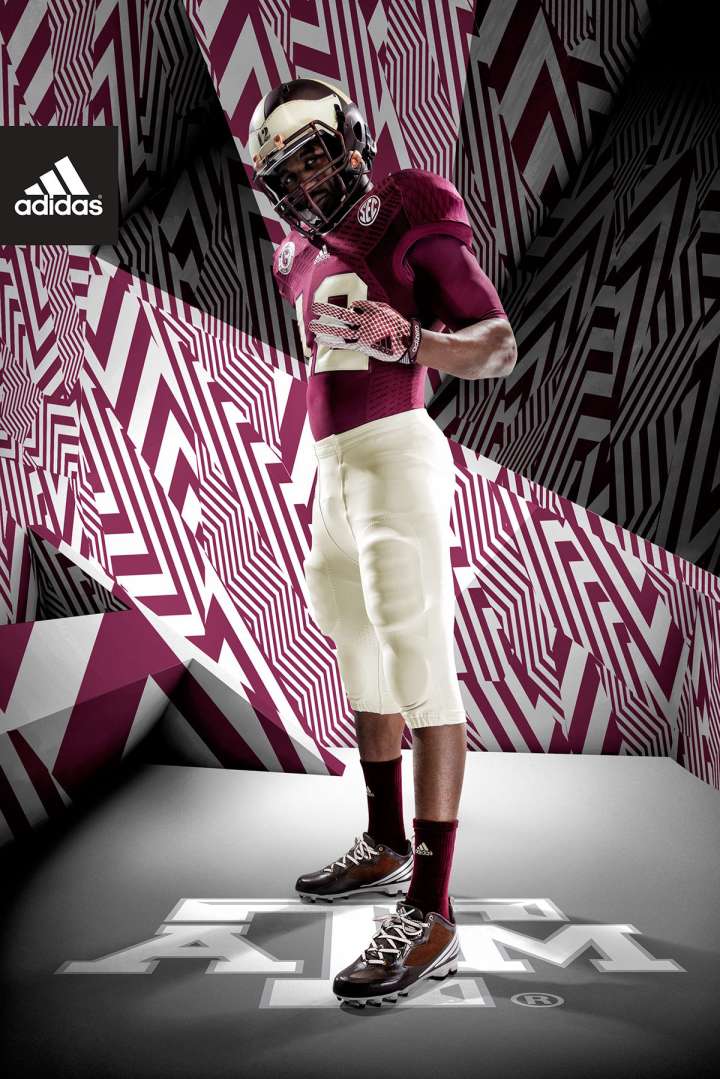 Texas A&M and Adidas unveiled IcedOut alternate football uniforms for the then sixth-ranked Aggies’ game at Mississippi State on October 4, 2014.

Texas A&M’s new look is head-to-toe white with silver metallic accents, featuring lightweight no-sew maroon numbers on the jerseys set against a silver state of Texas graphic. Laser-cut silver metallic stripes run down the sleeves and the pants, while a large “Lone Star” logo appears on the hip. 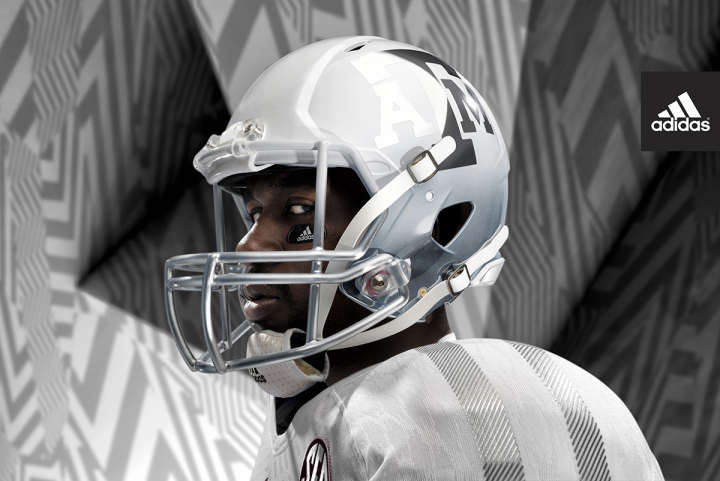 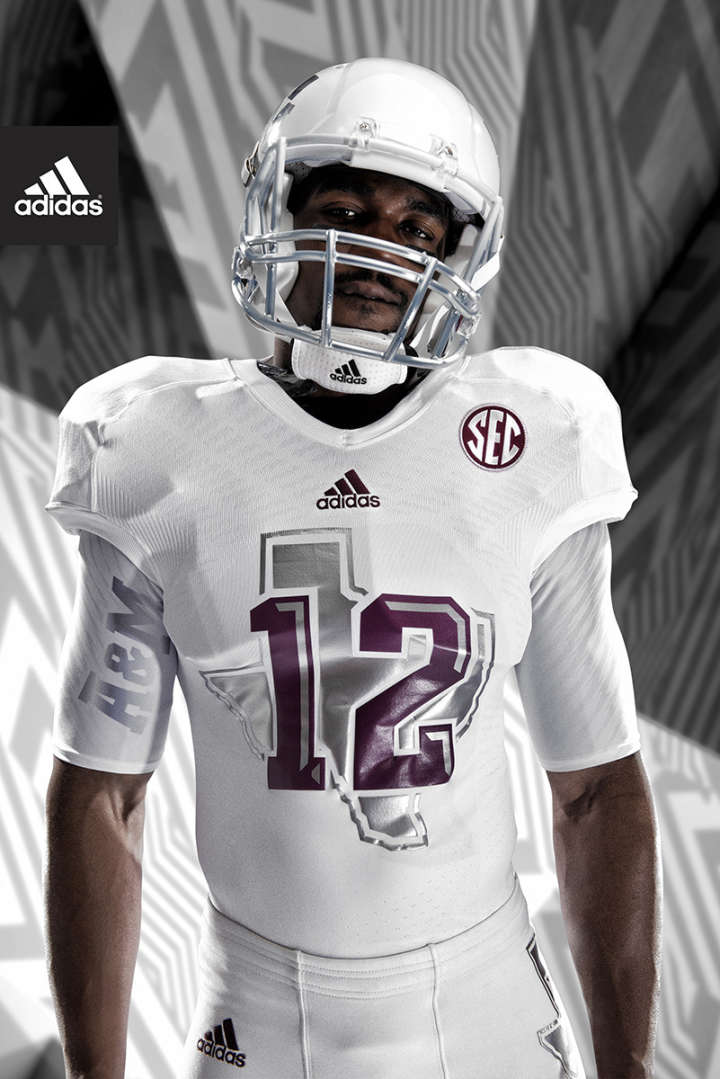 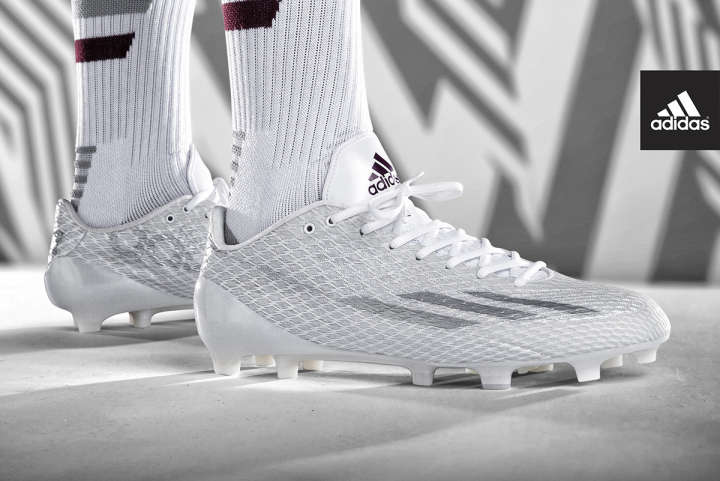 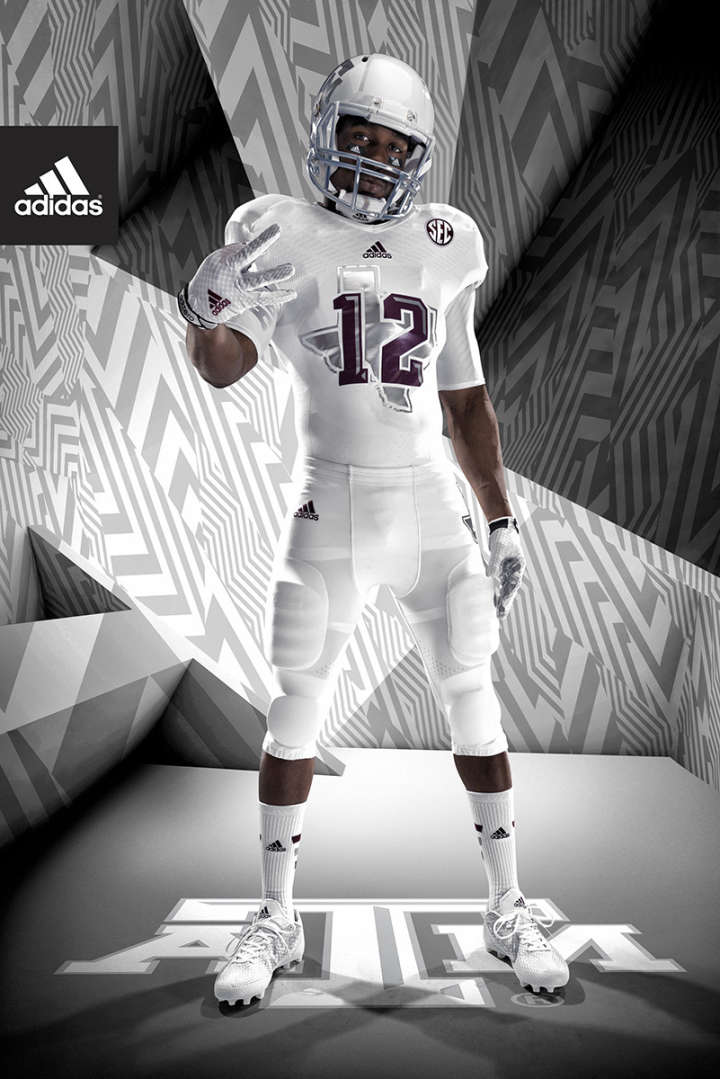