Miami Miracle vs Duke and the greatest multiple-lateral, game-ending plays in football history

Miami Miracle vs Duke and the greatest multiple-lateral, game-ending plays in football history

The Miami Hurricanes game-winning kickoff return against Duke in 2015 added to a college football season already rich in last-play turnarounds (see Michigan State vs Michigan, Florida State vs Georgia Tech). But what makes the Miami Miracle stand out is that it involved 8 laterals, 4 officiating mistakes and advanced the ball upfield a total of 132 yards.

The skill required for accurate radio commentary on the play was almost as impressive as the play itself. 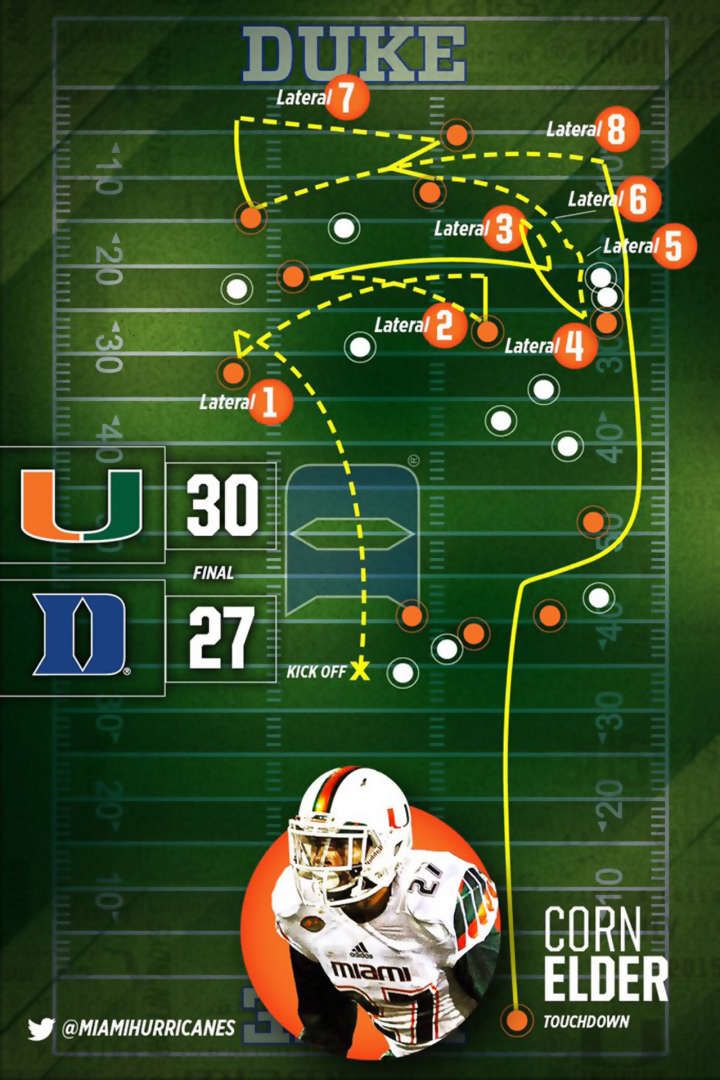 The Canes’ epic win was inarguably breathtaking (just ask Duke’s kickoff-return defense), but how does it compare to the greatest multiple-lateral plays in football history?

October 27, 2007: It took more than a minute and 15 laterals for Division III Trinity to pull off the Mississippi Miracle. Trailing 24-22 with the ball at its 40 and two seconds remaining, Trinity turned a short pass into a 60-yard score after seven of the 11 players touched the ball including, Blake Barmore, Shawn Thompson, Riley Curry, Josh Hooten, Michael Tomlin, Stephen Arnold, and Brandon Maddux. Wide receiver Riley Curry wove his way over the final 35 yards into the end zone after getting the ball for the fourth time.

STANFORD VS CAL: THE PLAY

November 20, 1982: John Elway’s collegiate career with Stanford come to a close with a loss, after Cal scored on an improbable play that many consider the greatest in college football history. Stanford had a 20-19 lead with 4 seconds remaining in the fourth quarter. The Golden Bears used five lateral passes to return the ensuing kickoff for the winning TD, with the Stanford band unintentionally running interference over the final yards. The final tally was California 25, Stanford 20, and one Kevin Moen-flattened trombonist in the end zone.