The charm of 8-bit video games lives on in movies like the Wreck-It Ralph, and vintage gaming consoles available on E*Bay, but for pro football fans, Temco Bowl (and later Temco Super Bowl) set the standard from 1989 through the mid 90s. 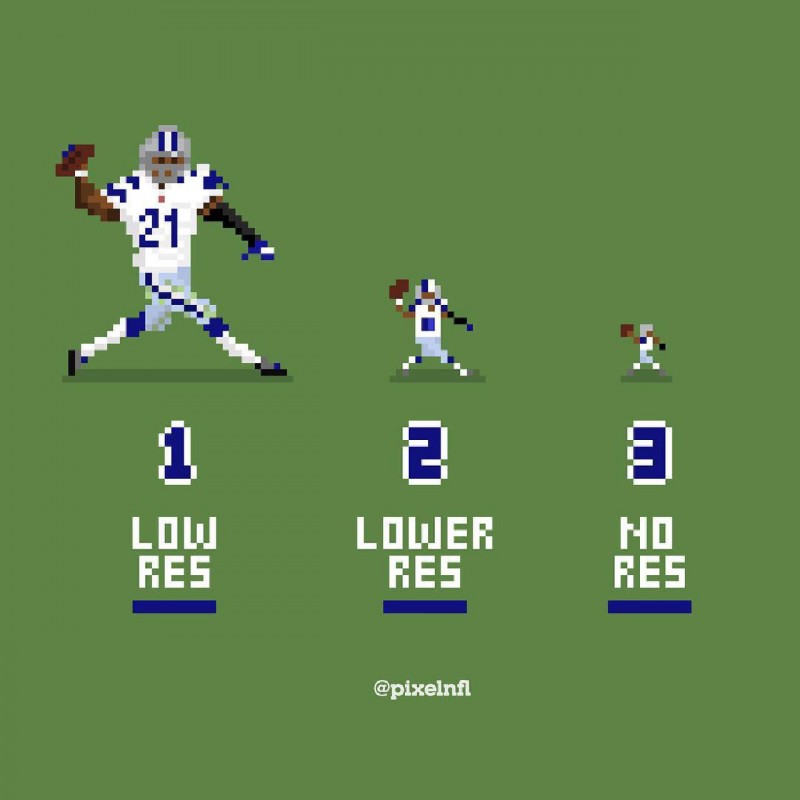 Now, contemporary NFL stars are being immortalized in all their blocky glory by one enterprising pixel pusher on Instagram. What follows are famous plays and poses from today’s NFL rendered in 8-bit graphics by PixelNFL…

Jason Witten’s 2019 announcement that he would un-retire to once again take the field for the Dallas Cowboys earned him the full pixelated treatment from PixelNFL.

The Miami Dolphins started the 2018 season feeling pretty good about themselves. During their victory over the Raiders which would push their record to 3-0, Ryan Tannehill connected on a long pass to Albert Wilson, who had enough room to give teammate Jakeem Grant a celebratory high five on his way to the end zone.

Super Bowl 52’s clash between the Philadelphia Eagles and New England Patriots was reimagined as a battle from the arcade-classic Street Fighter, with quarterbacks Nick Foles and Tom Brady as the combatants.

In 2017, Kareem Hunt — then playing for the Kansas City Chiefs — scored a second touchdown against the Eagles, effectively putting the game to bed. Naturally, he celebrated the TD by sleeping on the football in the end zone.

Neither snow nor rain nor heat nor gloom of night stays Packers quarterback Rodgers from his belt celebration in Green Bay.