While few politicians are as polarizing as Donald Trump, almost everyone agrees — irrespective of party affiliation, creed, sex or nationality — he wasn’t afraid to share his opinions on Twitter… including his thoughts on sports. The former President was in office only a short while before his first official football tweet as POTUS was to comment on Super Bowl 51’s result.

Trump sent congratulations via Twitter to the triumvirate of Tom Brady, Robert Kraft and Bill Belichick after the New England Patriots shocked the Atlanta Falcons 34-28 in overtime.

What an amazing comeback and win by the Patriots. Tom Brady, Bob Kraft and Coach B are total winners. Wow!

Trump’s particular interest in football shouldn’t come as a surprise considering he was once the owner of the erstwhile USFL’s New Jersey Generals.

Some have wondered if the USFL would still be going strong had Trump not convinced the league to schedule games head-to-head with the NFL in 1986. 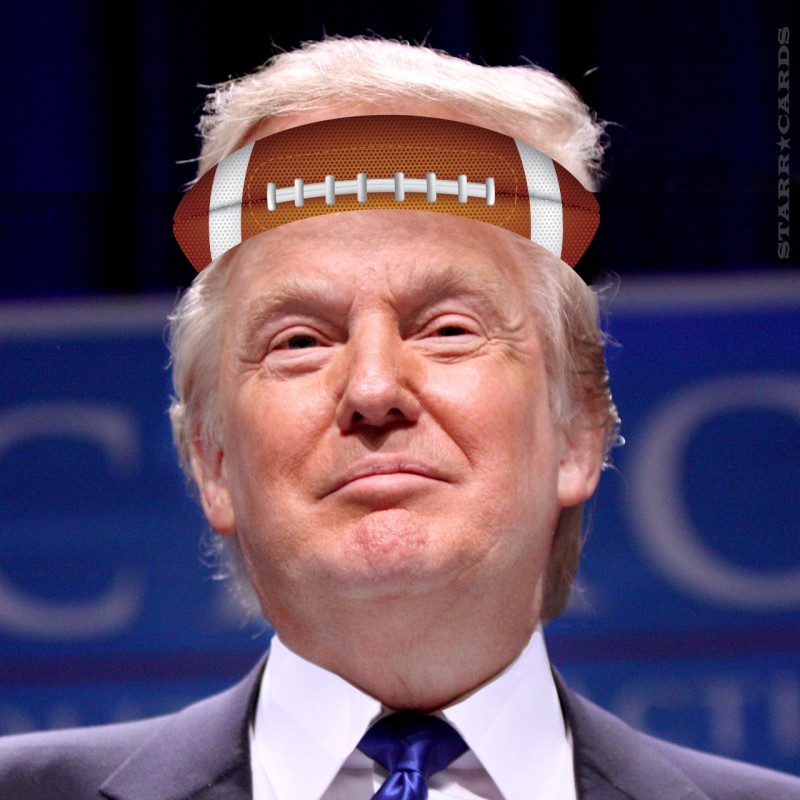 Alas, the USFL is no more, but with the advent of Twitter, Trump has found the perfect platform to continuing opining on football.

After the Kansas City Chiefs won their first Super Bowl in more than 50 years, the President tweeted congratulations to the team from… Kansas?

Make up your mind. Are you proud of Kansas or Missouri?https://t.co/lMbQKc2vs4 pic.twitter.com/mWMcSDN7yT

A short while later, staff caught the error and congratulations were extended to Missouri.

A great day at the White House for our National Champions, the LSU Tigers! https://t.co/0sbotFsMO7

In October, 2013, Trump took then President Barack Obama to task for what he perceived to be misplaced priorities…

President should not be telling the Washington Redskins to change their name-our country has far bigger problems! FOCUS on them,not nonsense

…which caused some political commentators to decry as hypocritical his attack on NFL players taking a knee during the anthem.

If a player wants the privilege of making millions of dollars in the NFL,or other leagues, he or she should not be allowed to disrespect….

…our Great American Flag (or Country) and should stand for the National Anthem. If not, YOU'RE FIRED. Find something else to do!

While still running for President, the Donald seized an opportunity to take a simultaneous dig at Republican primary opponent Jeb Bush and the New York Jets. Woody Johnson’s team had just missed out on the playoffs when they lost a turnover-riddled game to the Buffalo Bills.

Woody Johnson, owner of the NYJets, is @JebBush’s finance chairman. If Woody would’ve been w/me, he would’ve been in the playoffs, at least!

The vast bulk of the real-estate mogul’s football tweets concern his not-so-secret man-crush on Brady. At a rally in New Hampshire during the Presidential campaign, Trump claimed to have garnered Brady’s vote, although Brady’s wife Gisele Bundchen attempted to scuttle the claim with a comment posted on Instagram.

Donald Trump says Tom Brady called him and said he voted for him. I'm sure this is going to go over really well. pic.twitter.com/gNxGHsanGf

Whether or not he split the Brady family’s vote, Trump had made his admiration of Mr. Brady abundantly clear over the years…

To Tom Brady @patriots and Gisele–Best wishes on the birth of your daughter. Tom is a great player and great friend.

Tom Brady would have won if he was throwing a soccer ball. He is my friend and a total winner! @Patriots

Love that Patriots won – Brady is best ever! Seahawks pass was DUMBEST play in the history of football! Great going COACH B!

Tom Brady would have won if he was throwing a soccer ball. He is my friend and a total winner! @Patriots

"@delonte3ast: Tom Brady is about to win the next 5 Super Bowls and visit @realdonaldtrump in the White House." Very cool!

Tom Brady is a good friend of mine, a great player, a great guy and a total winner! Fantastic comeback win-this is what our country needs!

You can be an @nfl player with murder charges and not be suspended. Yet with NO EVIDENCE, @nfl targeted Tom Brady. B.S.!

I hope Tom Brady sues the hell out of the @nfl for incompetence & defamation. They will drop the case against him–and he will win.

Who ever heard of a legal conviction statement “more probable than not” against Tom Brady? Sue them, Tom, and make lots of $. @nfl

“Fortunately for a quarterback, you can play for a long time because you don't get hit very often.” – Tom Brady @SuperBowl @Patriots

Congratulations to Tom Brady on yet another great victory- Tom is my friend and a total winner!

Tom Brady just did it again. He is not only a great guy, he is, without question, the BEST quarterback!

Congratulations to Bob Kraft, Bill Belichick, Tom Brady and the entire New England Patriots team on a great game and season. Will be a fantastic Super Bowl!

Peyton Manning should have passed on 3rd down!

"@billsupdates: Why Buffalo Bills could be responsible for Donald Trump becoming president https://t.co/JxF7kjfaZR" Team has a great owner!

Even though I refused to pay a ridiculous price for the Buffalo Bills, I would have produced a winner. Now that won’t happen.

The people of Buffalo should be happy Terry Pegula got the team but I hope he does better w/the Bills than he has w/the Sabres. Good luck!

The @nfl games are so boring now that actually, I’m glad I didn’t get the Bills. Boring games, too many flags, too soft!

The Football program at Penn State should be suspended.

Congratulations to a truly great football team, the Clemson Tigers, on an incredible win last night against a powerful Alabama team. A big win also for the Great State of South Carolina. Look forward to seeing the team, and their brilliant coach, for the second time at the W.H.

I look forward to hosting, right out of the great State of South Carolina, the 2019 NCAA Football Champion Clemson Tigers at the White House on Monday, January 14th. What a game, what a coach, what a team!

Great being with the National Champion Clemson Tigers last night at the White House. Because of the Shutdown I served them massive amounts of Fast Food (I paid), over 1000 hamberders etc. Within one hour, it was all gone. Great guys and big eaters!