Blaine, a Minneapolis suburb of 60,000, is home to some of the world’s youngest sports psychologists. Northpoint Elementary first graders consoled Minnesota Vikings kicker Blair Walsh after his botched 27-yard field goal allowed the Seattle Seahawks to escape the Twin Cities with a playoff victory.

Walsh was inundated with hate messages on social media after Sunday’s game — the authors of which failed to appreciate the kicker’s invaluable contribution to the team over the course of the season. Walsh not only led the NFL in made field goals, but he made three of four against the Seahawks in frigid weather.

The Northpoint Elementary six-year-olds countered the negativity directed at Walsh with an outpouring of empathy for the 26-year-old. 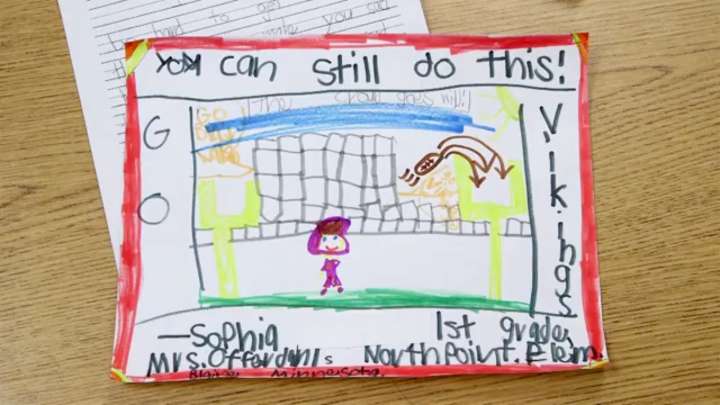 Sophia Doffin, in particular, went all out in offering Walsh her condolences. Her missive included not just one, but four post scripts.

I know that it can be hard to get through things that make you sad, but you have to try and try again. Everyone makes mistakes sometimes. One time I made a mistake when I was doing a cartwheel. I felt embarrassed. But you can still help the Vikings win the Super Bowl next year.

Conspiracy theorists have suggested that Walsh’s improbable miss may have been the result of his Tonight Show Superlatives’ award going to his head earlier in the week.

No matter what the cause, Northpoint student Tasha Lee’s concise advice should aid Walsh moving forward.

For Blair Walsh. Keep on trying. Puppys are cute.