Having your birthday fall on Christmas is something of a double whammy. Not only is your special day overshadowed by the birthday of Jeshua ben Joseph (aka Jesus of Nazereth), but it increases the chances you won’t get your full allotment of gifts. 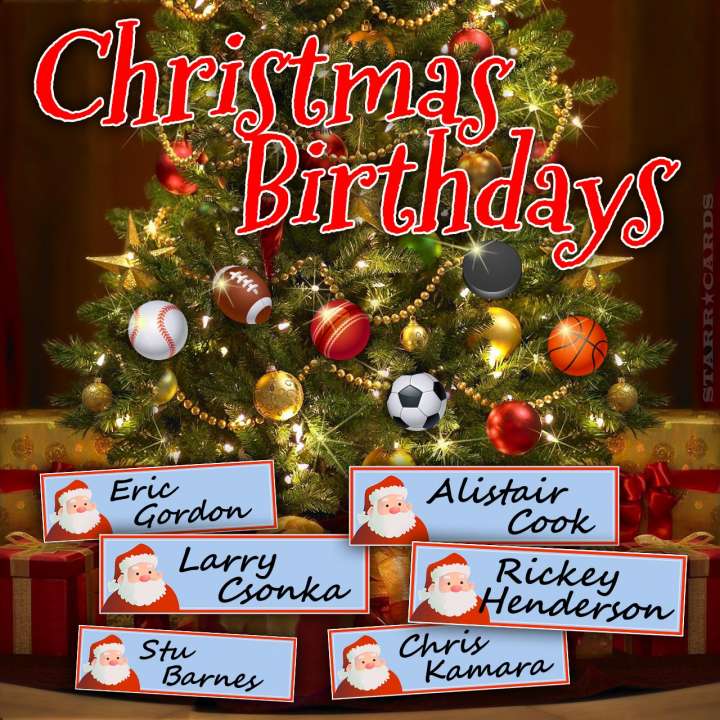 Despite these shortcomings, a number of Christmas babies have gone on to become big-time stars in their respective sports…

Eric Gordon Jr. (born December 25, 1988 in Indianapolis, Indiana) spent a single season in college with the Indian Hoosiers, before getting selected in the 2008 NBA draft at No. 7 by the Los Angeles Clippers.

Gordon finished his freshman season at Indiana averaging 20.9 points, 3.3 rebounds, and 2.4 assists per game, and was Big Ten Freshman of the Year as well as third-team All American.

Lawrence Richard “Larry” Csonka (born December 25, 1946 in Stow, Ohio) was the featured back of the only NFL team to finish with a perfect record — the 1972 Miami Dolphins — and won a second Super Bowl ring with the team the following year.

The hulking Csonka, started his high school football career at defensive end, before moving to running back his junior year. In college, at Syracuse, he was again assigned to the defense, before flourishing at fullback from 1965 to 1967, setting a school record with 2,934 rushing yards.

Honorable mention: Kenny Stabler (born July 4, 1945 in Foley, Alabama). Stabler quarterbacked the Raiders to victory in Super Bowl XI, was the 1974 NFL Most Valuable Player and was selected as a backup quarterback for the NFL 1970s All-Decade Team. Stabler was posthumously elected to the Pro Football Hall of Fame in 2016.

Rickey Henderson (born December 25, 1958 in Chicago, Illinois) was a 10-time All Star over the course of his 25-year career in the big leagues, and won the 1990 American League MVP award when he batted .325 and stole 65 bases for the Oakland A’s.

Christopher Kamara (born December 25, 1957 in Middlesbrough, England) is best known by today’s generation as the long-running co-presenter of Sky Sports’ Goals on Sunday, but he also had a long career on the pitch from the mid 1970s through the mid 1990s.

Barnes played twice in the Stanley Cup Finals; in 1993, with the Florida Panthers, and in 1999 with the Buffalo Sabres — but came up short both times. He did get a nice consolation prize, however, in the form of a hometown arena named in his honor.

Alistair Nathan Cook (born December 25, 1984 in Gloucester, England) is regarded as one of the greatest batsmen ever to play for England. The former captain of the England Test and One Day International (ODI) teams, Cook holds a number of English and international records.

Cook, who has has scored a record 31 Test centuries for England, is the country’s most-capped player and has captained the team to an English record 59 Tests and 69 ODIs.