This Saturday night in Las Vegas, light heavyweight champion Daniel Cormier will challenge Stipe Miocic for his heavyweight title, marking just the third time in UFC history that a champion will get a chance at claiming a second belt. The co main-event, which was to feature a featherweight bout between champion Max Holloway and Brian Ortega was scuttled when the champ experienced concussion-like symptoms.

Both Cormier and Miocic come from wrestling backgrounds, but Miocic possesses superior striking power and Cormier has been susceptible to knock downs. 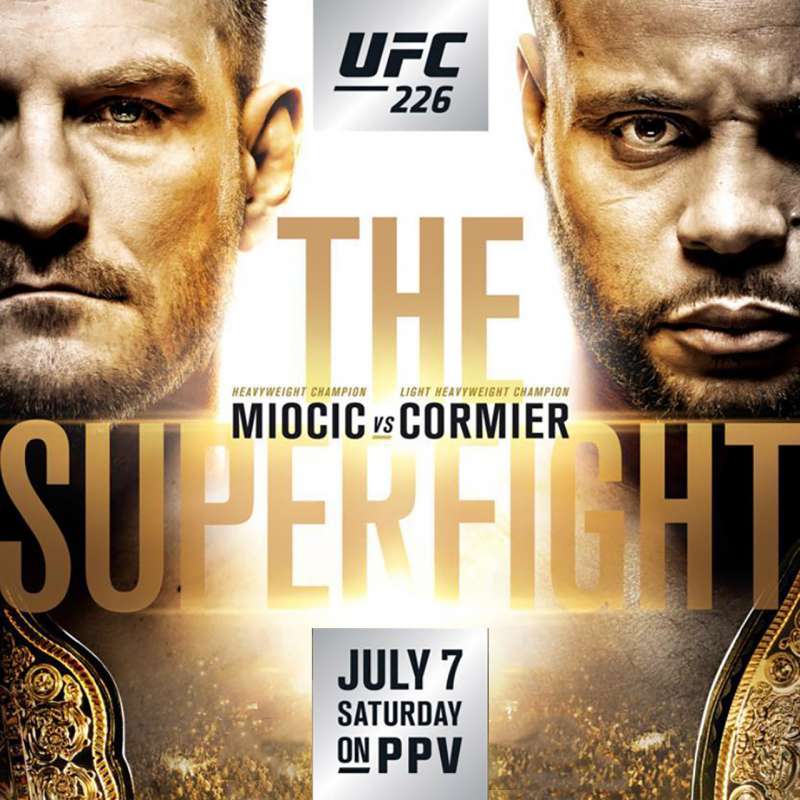 Cormier has the slight edge in takedown efficiency at 42 percent compared to Miocic’s 37 percent, but the later averages more takedowns per 15 minutes (2.35, compared to Cormier’s 1.89). DC brings a 20-1 (1) record into the bout — the only blemishes having come against Jon Jones — while Miocic is 18-2 with a UFC record three heavyweight belt defenses.

On Episode 1 of UFC 226 Embedded, featherweight champion Holloway adjusts to the heat of Las Vegas, while Cormier adjusts to working out at his new size. Miocic risks life and limb to assemble his soon-to-be-born daughter’s playpen.

Ortega juggles training, surfing, music and karma, while Holloway puts in time at the UFC Performance Institute, and Cormier spends time on the soccer field.

On Episode 2, Miocic finishes his training camp but continues his hunt for gold, while upcoming opponent Cormier packs for fight week and Ortega gives a tour of his childhood home.

On Episode 3, Miocic arrives in Las Vegas, as featherweight title challenger Ortega takes his crew sightseeing and clothes shopping in his hometown.

Cormier and Holloway check in to begin their fight week duties. Heavyweight Derrick Lewis visits the UFC Performance Institute to help him make the 265-pound weight limit by Friday.

On Episode 4, Miocic trains at a local gym, and opponent Cormier invites some fans to see him do the same. Both headliners entertain on a larger scale at the official open workouts.

At the UFC Performance Institute, Lewis shares his theory on Pay-Per-View sales. Friends and cardmates Michael Chiesa and Ngannou sharpen their lethal weapons together on the Fourth of July.

On Episode 6, fighters hit the scale with UFC Hall of Famer Matt Hughes in attendance, as Chiesa misses the 155-pound limit and declares it his last trip to lightweight.

At the ceremonial weigh-in, things get heated between Chiesa and opponent Pettis — as well as between co-main eventers Ngannou and Lewis — during their final face-offs.